Wine Shops in and around Machane Yehuda

Instead of including this in my first blog post about Machane Yehuda I thought I'd add a separate post about the wine shops in and around the market. I also thought I'd take the liberty of rating them.
﻿
Gefen, Now called David Chaim Wine shop
﻿
You will find this wine shop on the right hand side as you enter the open part of the market, coming from Yaffa street (where the Light Railway runs by).
I have spoken about this shop in my post about the Gvaot Petit Verdot so I won't repeat myself. Sales persons here are a mixed bunch. Some are very knowledgeable, others less so. All tend to be very young, in their early 20s ﻿and part timers. Today, for instance there was an American (but Israeli born)Yeshiva bocher from Harnof who was actually pretty knowledgeable when it came to wines but knew almost nothing about whisky. I spent about half an hour there giving him a crash course in Single Malt Whisky only to have him admit that this was a temporary job and I probably wouldn't see him here again!
Prices are average. I found that wine prices are more or less fixed and they will not budge from the stated price tags (if there is one on the bottle, very often there is not) but when it comes to single malt whisky, you can bargain them down, sometimes as much as fifty shekels. As I've just mentioned, quite a few bottles are not priced and too many mis-priced so it's always worth checking. My advice is to get the sales person to check every item on the computer before purchasing. 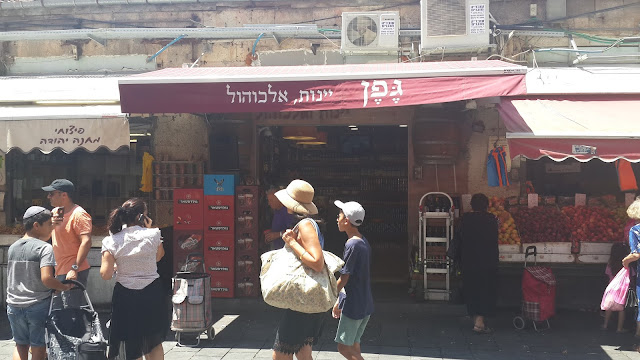 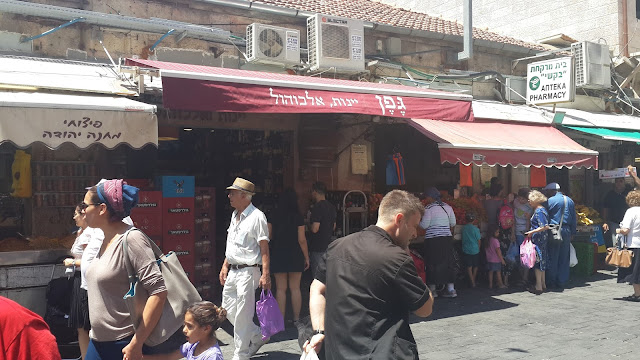 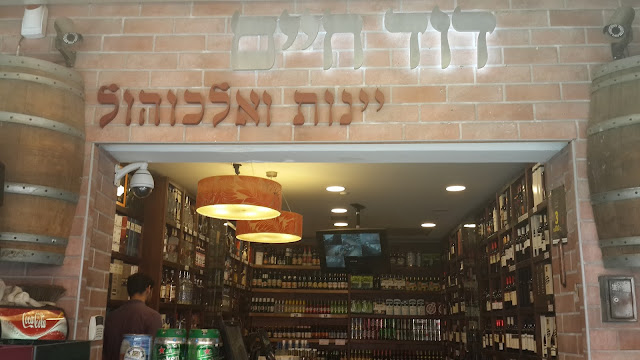 In the main "Indoor section" of the market on the right hand side, coming from Yaffa street,  almost to the end where it comes out on Agrippas street, you will find "Chomot HaYayin". This is actually one of three stores all owned by the same guy. The other two are "Yayin BeShuk" (see below) and across from Machane Yehuda in the Davidka Square off of Yaffa street there is his third store, also called "Homot Hayayin". 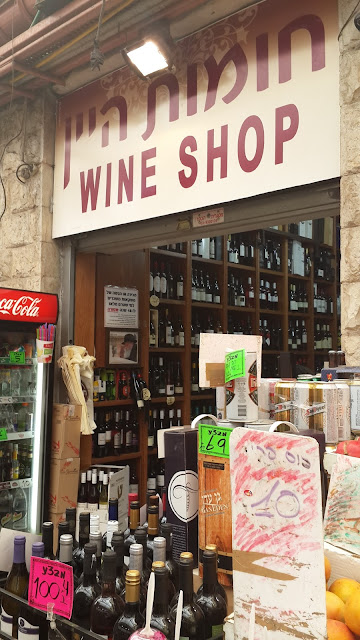 This is a very small store but in a prime location. The whisky stocked is limited and very very expensive. Wine prices though are just slightly above average but you can bargain him down. The store is run by Yossi who is an experienced and knowledgeable wine salesman, pleasant to speak to and on the whole, gives good and honest advice. He tells me that Rental prices in this main section are very high so he relies on giving people good recommendations and building up return customers.
One example: I was very impressed by a particular 2013 vintage wine (now all sold out everywhere) and so when I saw in his store the 2014 I picked it up. "No No!", Yossi said. "Don't buy that, the 2013 was great but the 2014 is awful!" He then proceded to recommend another Rose by the "Flam" winery. (I'll let you all know very soon what I thought of this wine). 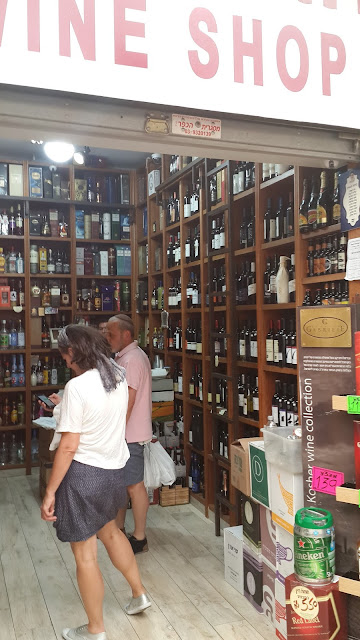 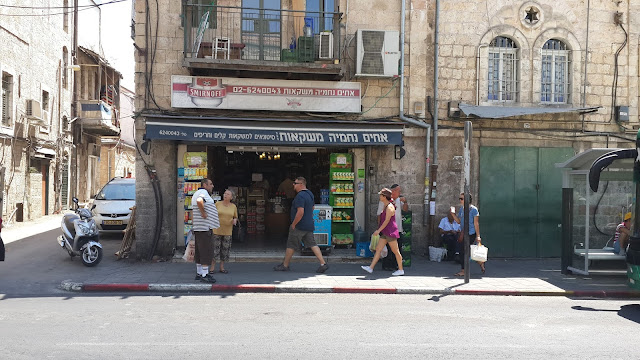 As you come out of the main shuk, the shop is situated on Agrippas street on the right hand side, going towards the Binyan Clal centre. This is quite a well sized shop with a narrow entrance but it goes back a long way inside. You can find some very good deals on cheaper wines and spirits here and the prices for the better wines are average to below average.

Scotch whisky blends are also reasonably priced but when it comes to single malts, despite having a very respectable variety of brands, for some strange reason, all their prices are still at pre-Tax Reform levels. We are talking over a hundred shekels and more, above the average price. I've tried talking to them but they simply do not want to know.

The store has a "pack it high, sell it low" feel about it so don't expect them to give you any advice. Prices are clearly marked on every item though.

They know virtually nothing about whisky and still have some old stock, (some from ten years ago) on the shelf. I bought some old stock Scapa 14 Year Old here, bottled around 2006 and even at pre-Tax Reform prices, they were selling it at half its market value. They also have some really old bottles of Tobermory 40% abv in the old 1980s style bottles. Worth popping into once in a while. 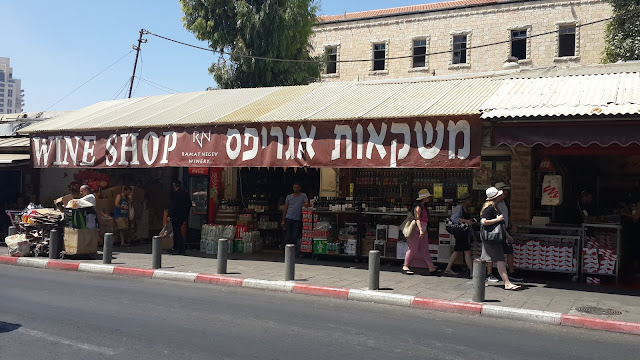 A medium to smallish shop in the shape of an "L". You'll find this directly opposite Achim Nechemia, on the left hand side as you come out of the main section of the shuk on Agrippas street. They are quite friendly there but not very knowledgeable. However, they do often invite wine experts to stand in the shop giving advice which is a nice touch. Regarding wine, prices are pretty average but you do get the occasionally special offer. Whisky prices vary greatly. Some are at pre-Tax Reform prices and others are average prices.

This week I popped into Mashkaot Agrippas with my son and noticed two British tourists/business people, escorted by an Israeli tourist guide, talking to the saleswomen about whisky. I got closer to listen in on the conversation and what do you know? These guys, Sofia and Gareth, were from William Grant & Sons, owners of Glenfiddich, Balvenie, Tullamore Dew, Grants blends and Drambuie. Apparently, they were doing a tour of the wine shops around Jerusalem, getting to know the local market. I got chatting with them about the shops here, knowledge of whisky in Israel and prices and gave them my blog details. This "chance" meeting was really the inspiration for this blog post. 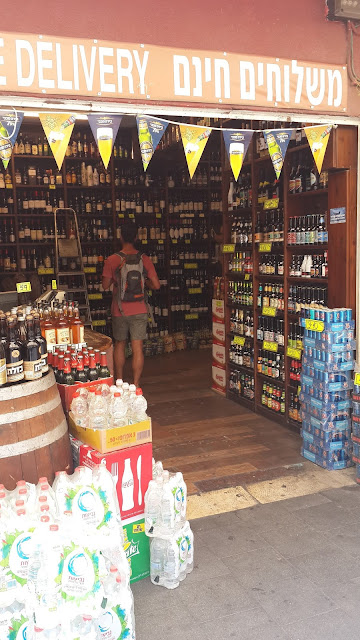 A bit of a weird shop this. (I'll explain below). You'll find it on Agrippas street opposite Berman's bakery and Binyan Clal building right at the end of what most people consider Machane Yehuda. As mentioned above, it is owned by the same guy who owns Chomot HaYayin inside the shuk but prices here are on average 20% cheaper. The sales guys are young and don't seem to be very knowledgeable except when it comes to beer! 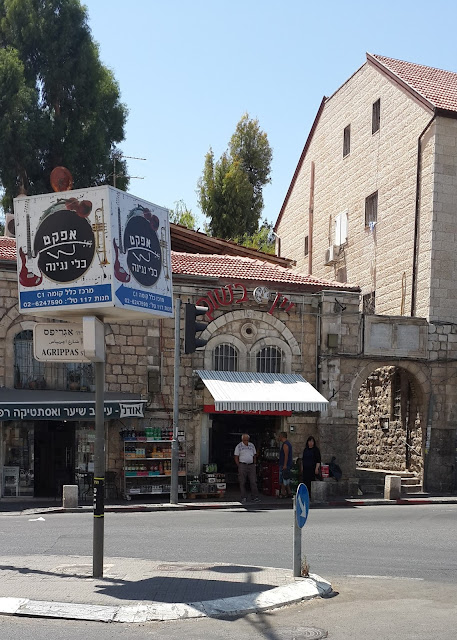 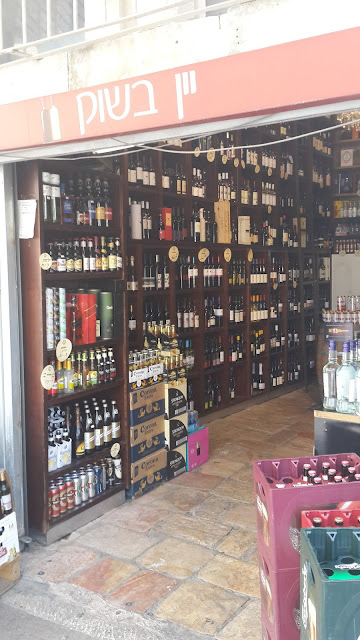 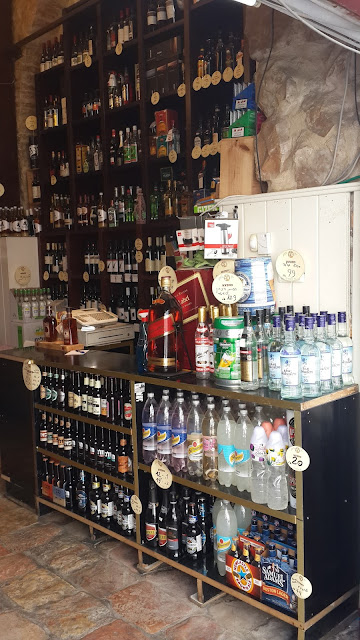 The main problem with this shop is that it's quite small but has a very high ceiling so they stock their wines and spirits on shelves going all the way up to the ceiling. This means that you cannot browse at all and have to rely on the sales guy to climb up a ladder to check year and price of bottles. You get a bit embarrassed to ask him to climb up and down after the third request. They often have bottles here though which have sold out in other places. Presumably because no one can be bothered to check on a shelf, four metres up! So if you are looking for something particular it's worth checking here. Scotch Whisky prices are below average and it's possible to bargain them down even more. 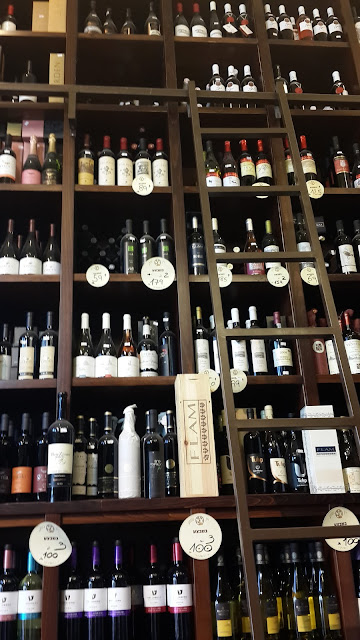 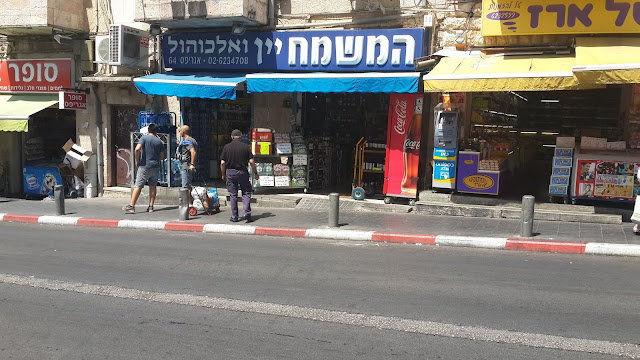 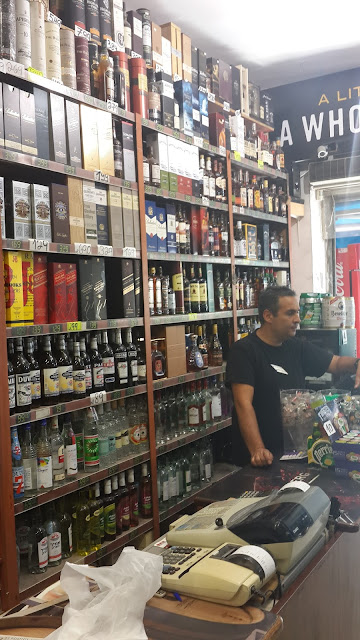 Located on Agrippsa street as you turn left, down the hill﻿ from the main open air section of the shuk. It is directly opposite the "Natural Bakery" which sells delicious wholemeal flour bread and cakes with a good selection of sugar free products as well. Unfortunately it is situated right outside the market's main rubbish tip with lorries going in and out the whole time carting away the quite considerable amount of muck accumulated in a typical market day. You can imagine what the smell is like!
Anyway, HaMesameiach is by far and away my favourite Machane Yehuda wine store. It is definitely the biggest with the largest stock. They also have a section for very rare bottles, some at four figure prices! Inside you will find the main section plus side rooms to explore.
Wine prices are pretty much always the cheapest and if you see it cheaper somewhere else they almost always agree to match it. Whisky prices can vary though. Most items are very well priced, often the cheapest in the market. Others are just average and they don't always agree to lower the price of whisky when you argue with them. Being that it is such a large store, I think it's a fairer to compare HaMesameiach with Aleph Aleph Piup in Ramat Eshkol. On the whole, HaMesameiach tends to be slightly cheaper when it comes to wine and Piup slightly and often considerably cheaper when it comes to whisky.
It is a family run business run by two brothers and very friendly. One of them has a son who works there called Danny. He is very knowledgeable when it comes to wine and is a quick learner when it comes to me teaching him about whisky. They are very honest there and it is always a pleasure visiting them.
They often invite wine experts to come in on a Wednesday and Thursday to advise on wines and chat. Well worth popping into this store whenever you are in the area. 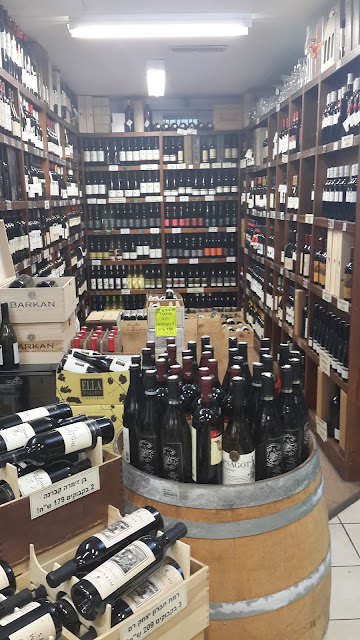 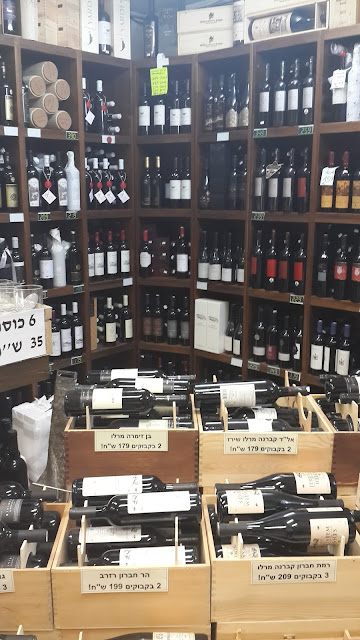 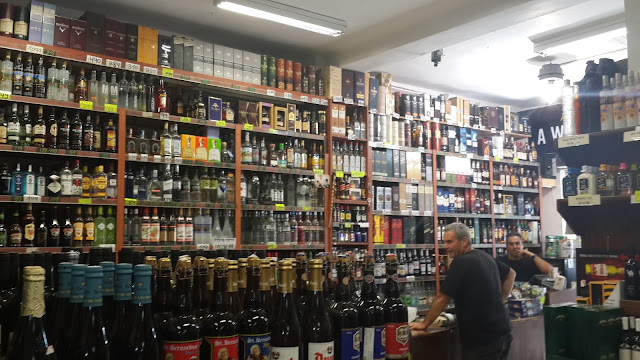 Avi Ben Wine store
I mention this shop even though it closed down this year as it was, once upon a time one of Machane Yehuda's most well known wine specialist shops. This shop really pioneered the specialist wine shop concept in Jerusalem and they still have a store in the centre of town in the tourist area. Personally, I hardly ever went there as whisky prices were high and half their wine stock was not kosher, either from non-kosher Israeli boutique wineries or famous French, Italian....brands.
﻿ 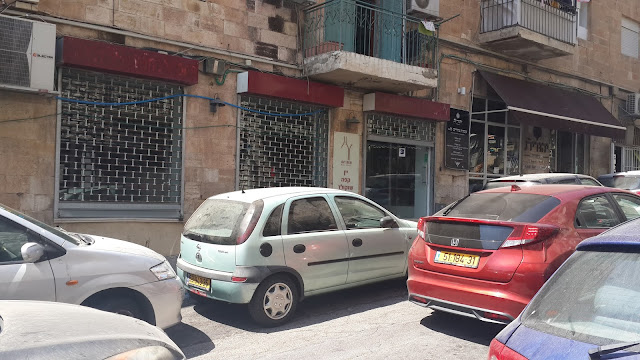 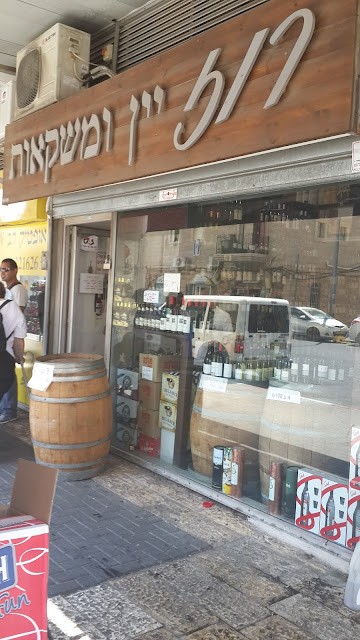 Situated at the beginning of Agrippas street on the left hand side, coming from the Central Bus station, outside on the main road but part of the white elephant building which was supposed to have been the new Machane Yehuda but became a total flop. The huge shopping centre is almost completely empty and boarded up except the second floor which has a super market and some offices.
The shop itself is quite small. Prices for the cheap budget wines, beers and spirits are reasonable to below average and that's how they make their money no doubt. The descent wines are above average in price but I had occasionally found something there, like a bottle of Kitron Merlot 2006 which had long since sold out everywhere else. Prices for Scotch are very high and the owner, who seems knowledgeable in wine is unfortunately, usually unwilling to bring his prices down from that stated on the price tag.
Well, I hope this has been useful to those who live here and at least an interesting read for those who don't.
Comments are always welcome.