Flam winery, located in the Judean Hills near the Beit Shemesh region, is considered by many experts to be one of the, (if not the finest winery) in Israel. I honestly wouldn't know as their cheapest red wine starts at well into the two hundred shekel price range.

Forgive me, all you wine purists but in my mind, this is serious single malt whisky prices and that bottle of malt will continue to dispense pleasure for a good few months, where as a bottle of plonk will be finished in under an hour. (Well, we have had wines that were so bad we couldn't finish them. They survived another week until we poured them over the chicken, for the following Shabbos meal).

However, this Rose, although amongst the most expensive non-red wine I have ever bought, was I thought, worth the risk as it came highly recommended and after all, it came from a winery with a wow wow reputation. At least I could say that I had tasted at least one Flam wine! 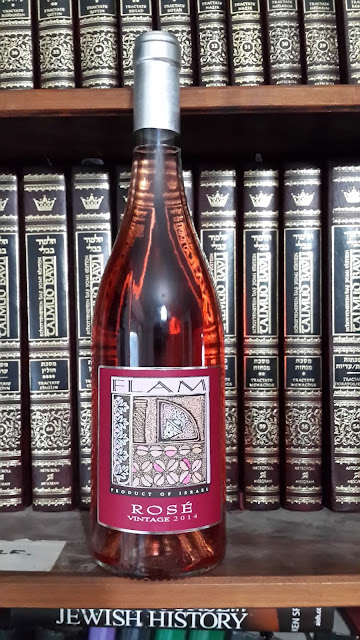 First, a word of warning. Rose wine ﻿can be very fragile. I have learnt from bitter (excuse the pun) experience that one should not put better quality Rose's in the fridge, even on the hottest of days as it turns the wine fizzy as well as destroying its bouquet. So this Flam was kept in my wine fridge at about 18 degrees Celsius.
﻿ 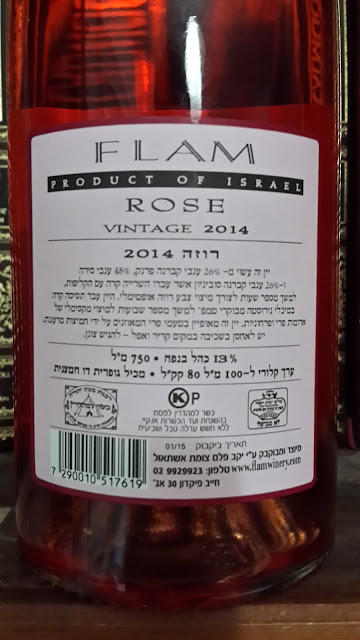 The Flam Rose 2014 is a blend of the grapes made up of the fruit of 26% Cabernet Franc, 48% Syrah and 26% Cabernet Sauvignon. It is then soaked for a short while in the skins just to give it that touch of red tan.
We opened the bottle﻿ as soon as we got home from shul and Kiddush DeRabanan was said some 5 minutes afterwards.
The aroma reminded me of when we were staying in a Moshav in the Golan Heights. Every morning I would get up very early to get to their Moshav shul to daven Shacharis and take a path through  fields of fruits and flowers. Even though it was early in the morning, it was still very hot and there was a smell of warm earth and bitter dew, fruits and blossom in the air. This is what I was getting from the glass.
Upon first drinking, the wine had a slight metallic taste and was also slightly fizzy. However, after 10 minutes the fizziness had completely disappeared but the metallic tinge remained in the background. Indeed, as the wine warmed up to room temperature ((difficult to know as we had the mazgan (air conditioner) on the whole time)), it did slightly improve in texture and fruitiness.
The taste was a combination of sweet dew caught in an open watering tank in fruit field, plus "petals" and "petel". That is, rose petal water with watered down too much raspberry cordial ("petel").
My daughter summed it up perfectly. It was like drinking the juice from a melted raspberry flavoured ice lolly, from a tin can. Lightly fruity in the mouth with something slightly bitter, like passion fruit pith?) in the background. The wine had absolutely no aftertaste whatsoever.
Bottom Line:
Not recommended. There are much tastier and more refreshing Rose's out there for half the price or less.