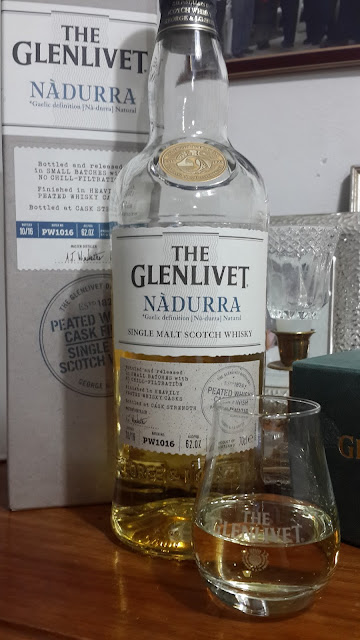 When we talk about peated whisky it is usually about malts that were distilled from malted barley which was dried out using peat as an energy source.
Anyone who has ever left porridge, soup or Shabbos Cholent on the fire for too long and burnt the bottom of the saucepan will know that even scooping off the top bit which doesn’t appear to be burnt, when you come to eat it, it still reeks of smoke and tastes burnt!

Likewise, this peat impregnates the barley with a heavy earthy smoke flavour which will have a major influence on the smell and taste of the whisky even after double distillation and years spent in Oak barrels.
These Nàdurra single malts are slightly different however. They smell and taste heavily peated but the malted barley used to distil this whisky was totally unpeated, dried most probably using gas energy heating or coal fire. So where does the peat reek come from? Well, if any of you have unfortunately experienced a house fire then you will know that smoke damage impregnates everything including wood furniture which did not even come into contact with the actual fire!
Now here, this expression of Nàdurra has been matured for an unknown amount of years (The Glenlivet won’t say, hence its NAS status), in oak casks having previously contained whisky from heavily peated malted barley.
Spoiler alert! These casks have imparted such a heavy peaty smoke character to this whisky, I doubt whether anyone who hasn’t read the press releases, would not simply assume that this malt had been made with peated malted barley!
The Glenlivet are not the first to do this. William Grant’s Balvenie 17-Year-Old Peated Cask, released in 2010, was matured for 16 years or so in European Oak and finished off in casks which had previously contained heavily peated whisky. There is no information as to where these casks came from, whether the whisky was peated Island, Islay or mainland Speyside.
What the Marketing Guys say… 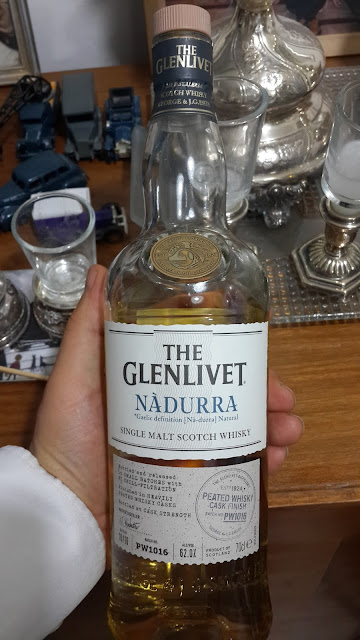 The marketing guys at Pernod Ricard are spinning a yarn about how this Nàdurra is close to the original taste of Glenlivet whisky which they claim was distilled from peated malted barley back in the early 19th century. As they state
“…we set out to create a whisky that George Smith [the founder of Glenlivet distillery in 1824] would recognise…”
“Our latest expression in the Nàdurra family boldly draws its inspiration from The Glenlivet’s historic whisky-making traditions in which peat smoke was used to dry the malted barley, lending a smoky flavour to the whisky. Unlike its two siblings, the Nàdurra Peated Whisky is finished in casks that previously held heavily peated Scotch whisky, giving a gently smoky twist to the classic, smooth and fruity house style that The Glenlivet is known for.”
All this marketing “shpill” would only make some sense if the casks they used have come from a Speyside distillery containing whisky made from peated barley where the peat was locally sourced from peat bogs in the Speyside region, as the original Glenlivet surely must have been.
So, where do these Nàdurra peated casks come from?
Doing some Googling I came up with these statements:
From “Master of Malt”
Matured in first-fill ex-bourbon casks before a finishing period in casks that previously held heavily peated (Speyside peat, as we understand it) Scotch whisky.
https://www.masterofmalt.com/blog/post/glenlivet-launch-peated-cask-nadurra-after-claiming-top-spot.aspx
From “Vintage Direct”
A variation on the smoking process rather than a traditionally peated whisky, this was matured in first-fill ex-bourbon casks before a finishing period in casks that previously held heavily peated Speyside malt whisky. Like the other Nadurras this is small batch, non-chill filtered and all natural.
https://www.nicks.com.au/glenlivet-nadurra-peated-cask-strength-single-malt-scotch-whisky-700ml
From “Robert Graham”
Glenlivet Nadurra Peated Whisky Cask Finish Speyside Single Malt Scotch Whisky. Bottled and Released in Small Batches with No Chill-Filtration. Finished in Heavily Peated Whisky Casks. Batch No. PW0715. Bottled 07/15
https://www.robertgraham1874.com/item/5520/Glenlivet/Glenlivet-Nadurra-Peated-Whisky-Cask-Finish-70cl-615-Vol.html
The Glenlivet distillery is owned by Pernod Ricard (Chivas Brothers). As far as I know, Pernod Ricard own only one distillery that produces heavily peated whisky and that’s Scapa in the Orkney islands. I know that companies are very liberal when it comes to exactly where the Speyside region extends to but it hasn’t extended to the remote Orkneys yet!
Let’s look at the relevant Pernod Ricard (Chivas Brothers) distilleries:
Aberlour              No peated spirit.
Alt-a-Bhainne    Peated whisky but only around 10PPM. Hardly monster levels.
Braeval                 No peated spirit
Dalmunach         Too new to have casks available.
Glenburgie         No peated spirit
Glen Keith           No peated spirit
Glentauchers     No peated spirit
Miltonduff          No peated spirit
Scapa                    Peated but not Speyside
Strathisla             No peated spirit
Tormore              No peated spirit
Let’s try it the other way.
Which Speyside distilleries which are not owned by Chivas, produce heavily peated whisky?
Tomintoul – Old Ballantruan
Benromach
BenRiach
Glen Moray
Glen Rothes
The Balvenie
Conclusions:
After quite some research I still have no clear answer to this question. The only information that I have is some “in the know” say that these casks came from a Speyside distillery and to confuse things even more, most reviewers (including me) have identified a coastal flavour to this peated malt. Had I not been told I would have said that these casks came from Islay!
Tomintoul’s Old Ballantruan has a recognisable mainland peat flavour so I would discount this. Glen Moray and Glen Rothes (in my estimate), are too small to supply casks in quantity needed for Glenlivet’s needs so I would discard them. That leaves The Balvenie, Benromach and BenRiach. Logistically, The Balvenie would seem the most likely but Benromach does have a definite coastal character. 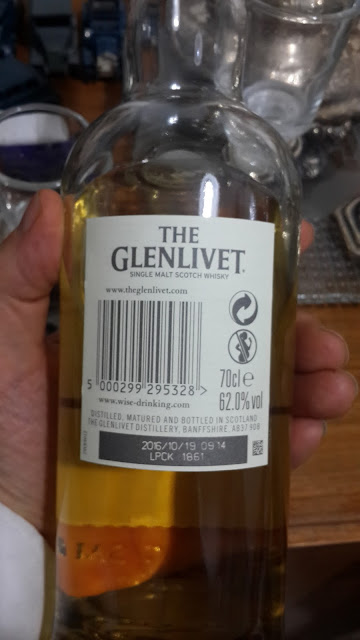 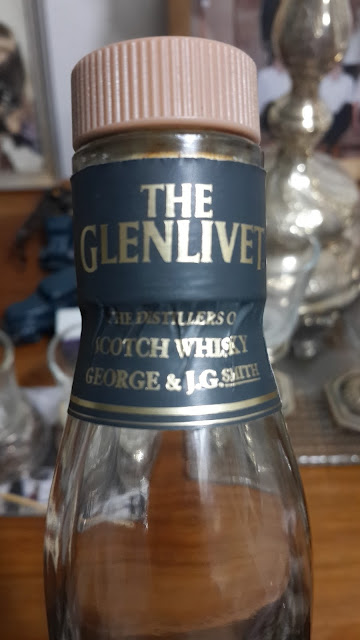 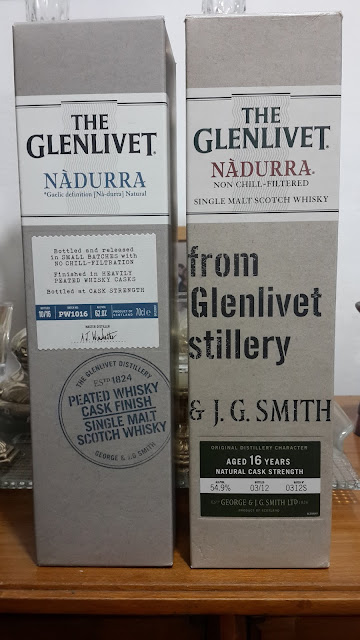 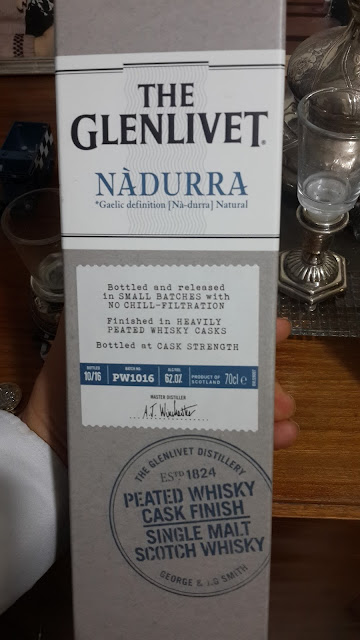 The packaging has not changed much since the original Nàdurra 16-Year-Olds first released back in 2008. I have a full review of the Nàdurra 16-Year-Old here:
http://rebmordechaireviews.blogspot.co.il/2015/07/the-glenlivet-nadurra-16-year-old.html 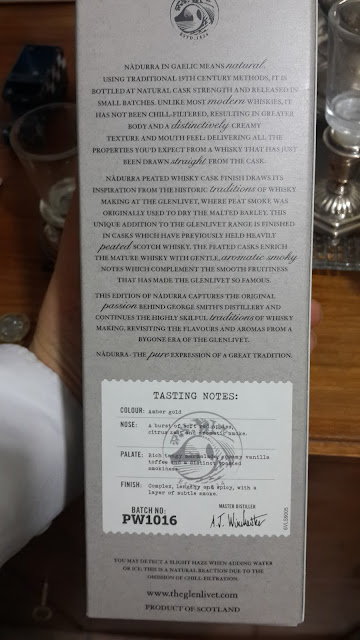 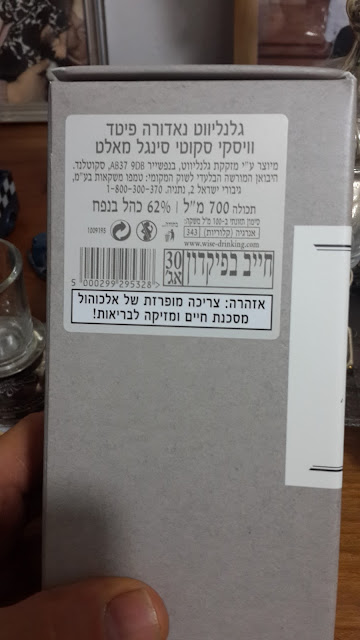 
The Nàdurra Peated Cask has a lovely natural looking pale straw colour to it. It looks to me like it is natural colour from Ex-Bourbon American Oak casks although it does not state this on the bottle. It does state however that it is Non-Chill Filtered and you can see this in the thickness and substantial mouth feel you get when you hold it in your mouth. 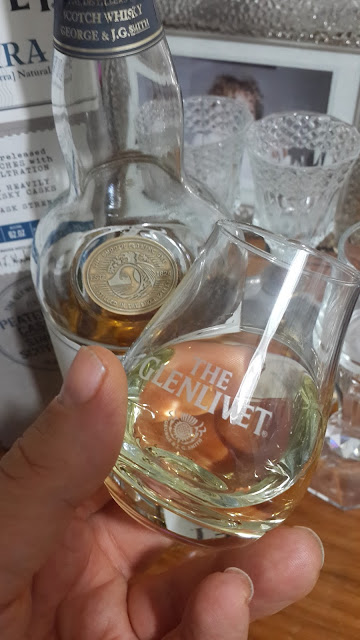 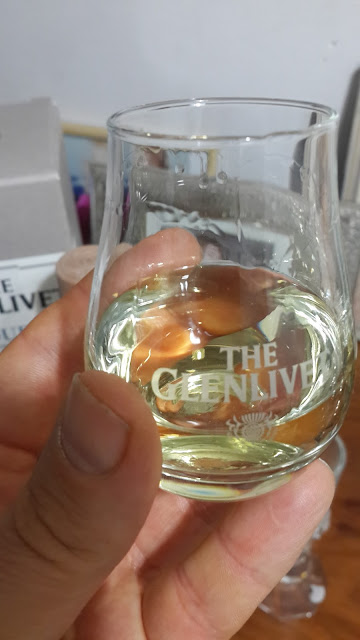 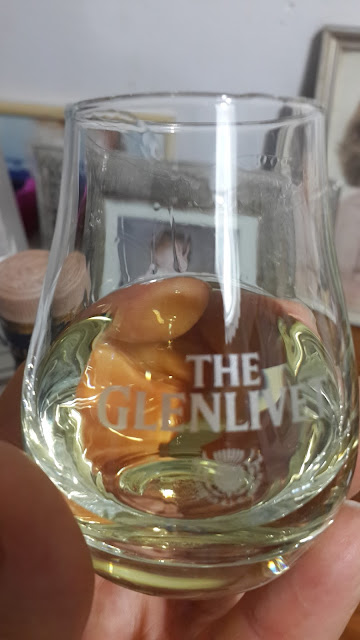 I have complained in the past that I have noticed that the Nàdurra 16-Year-Old gradually became darker and more caramel browny looking over the years and suspected that they started adding E150a caramel colouring at some point, despite the many reviewers insisting that all the Nàdurras were natural colour and the very word Nàdurra, in Gaelic, mean "natural"! I personally don’t buy it! Comparing the last batches of 16 to this expression, you can clearly notice the difference and the influence of caramel colouring in the 16-Year-Old. 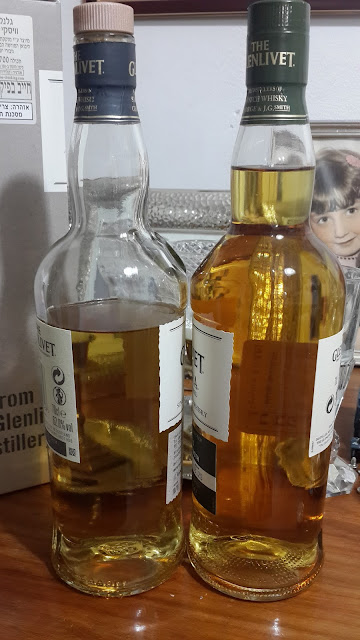 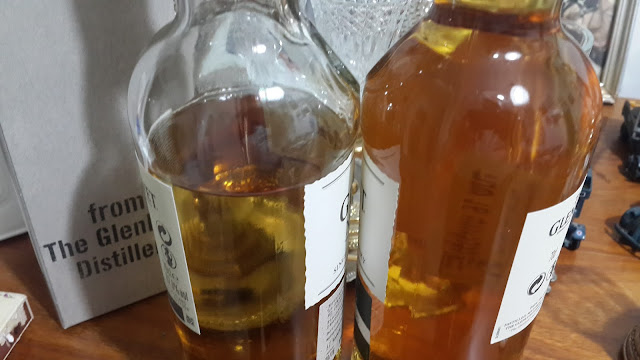 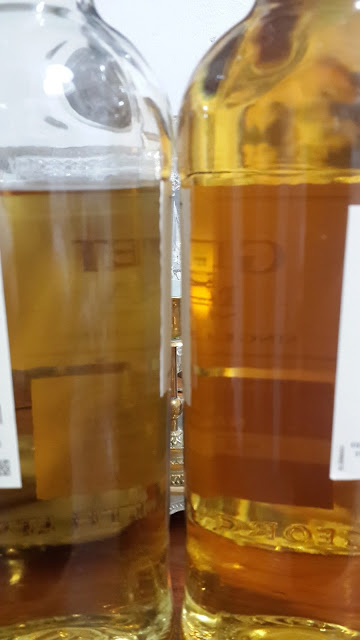 This is bottled at a whopping cask strength value of 61.5% abv. (It is interesting to note that previous Nàdurras have been bottled at around 55% abv). Please note that all my tasting notes are obviously after I have added water! (I cannot understand for the life of me, why anyone would want to sit down and drink a 61.5% abv spirit straight from the bottle unless they are a recovering Meths-drinker or thought it was somehow cool and manly not to dilute?!) 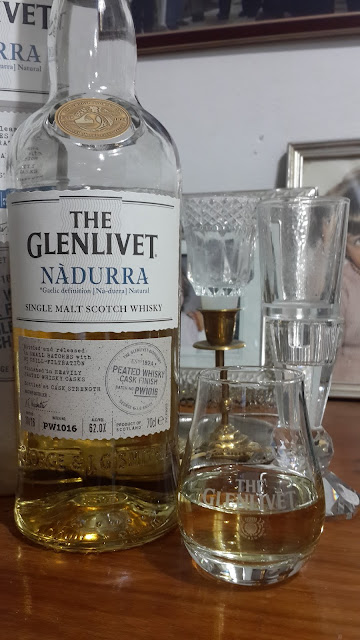 So, with water, it has a mildly coastal peaty ashy base with an aroma of sweet but salty coastal wood bonfire peat smoke with soft yellow apples, apple jam, Sugar Puffs and honey.
Tasting is slightly different. Green apple juice, Honey and Almond Country Breakfast cereal bar, salty burnt Sugar Puffs, apricot jam on scones, burnt milky fudge, mild furniture polish and some good wood spices on the finish.
Its overall character is very Speyside fruity but with that smoky peaty base to it. It actually tastes exactly as you would expect. Finish, primarily due to the peat influence I think, is considerably longer, fruitier and sweeter than the NAS First Fill Nàdurra. It is as if the peat element acts as a support and carries the more characteristic Glenlivet flavours much further into the finish. I really like that.
Final Thoughts 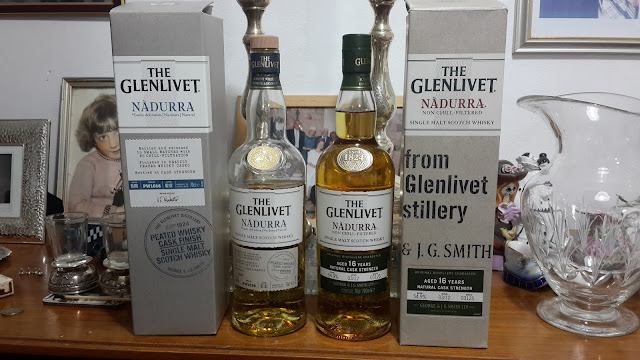 Now I find this whisky quite perplexing. If you would have asked me I would have said the peaty flavours are reminiscent of Islay whisky. If I was forced to guess, I’d pick Bowmore for its mild coastal clean smokiness. However, as I have already written above, these casks apparently came from Speyside! I cannot deny what I smell and taste though.
Although the peat is kind of “Bowmore-ish”, it still is very much recognisable as a Glenlivet Nàdurra with all the character flavour of both the 16-Year-Old, all be it in a younger friskier form and actually more like the NAS First Fill Cask Nàdurra which I have to admit I am not too impressed with. However, with the peat influence of this Nàdurra, it serves to camouflage all the nasty young new make spirit harshness. (Could this be why Glenlivet decided to do it? If so, good thinking!)
With the peat cask influence, this Nàdurra is really delicious and in my opinion, a valid and welcome addition to the range.
I must say that I was a bit surprised by the over-the-top response of some whisky reviewers, (notably all of them from North America), who have gone potty over this Peated Cask Nàdurra, giving it crazy scores and claiming it’s one of the best whiskies they have ever tasted.
I’m not sure where all this hype is coming from. In no way is this a "Must Have" wow wow wow single malt. Nevertheless, it is in my opinion, a very tasty and interesting whisky and one that I think both peat heads and Speyside whisky lovers will enjoy.
This very competent Nàdurra Peated Cask is selling for the same price as its poorer sister expression, the First Fill Nàdurra. Bearing this in mind, the Peated Cask would be my preferred choice of Nàdurras every time, that is unless you happen to come across the 16-Year-Old hiding amongst the other Nàdurras on the shelf. (It happened to me. You never know. It could happen to you as well!)