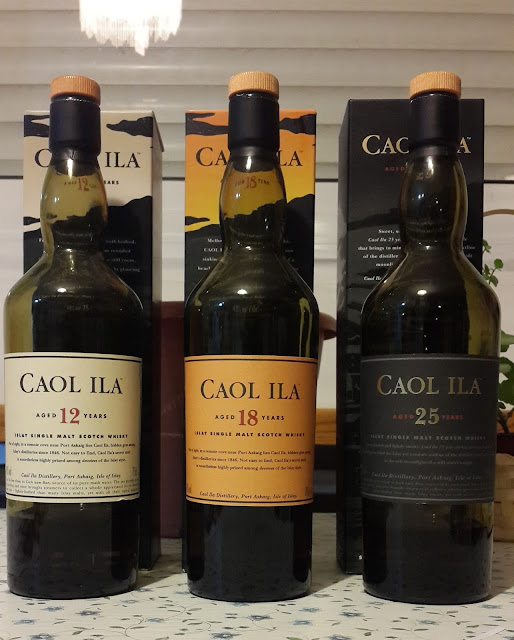 Everything wrong yet the result is so right!

Despite the fact that Caol Ila distillery is situated on one of the most beautiful islands in the world, the current structure, built in 1972, was designed for function only with no thought of aesthetics whatsoever. 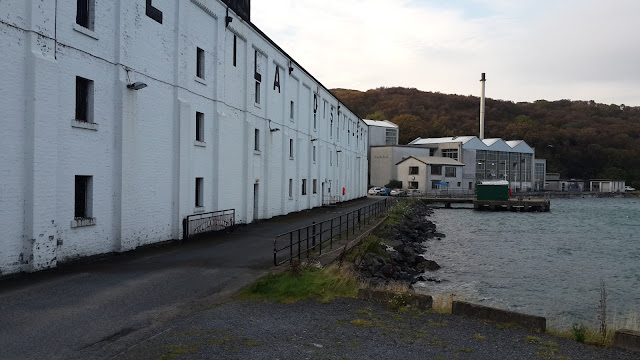 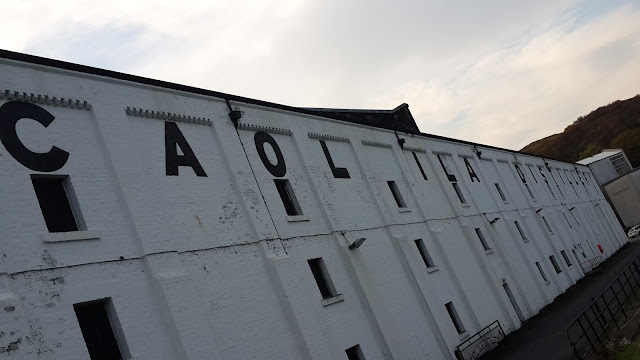 Let’s not mince words, Caol Ila is not a pretty distillery for sure, a drab grey factory building by the sea. No attempt whatsoever has been made to turn it into a tourist site unlike Laphroaig, Lagavulin, Bowmore, Kilchoman and Bruichladdich. It doesn’t even have the natural rustic charm of Bunnahabhain either. 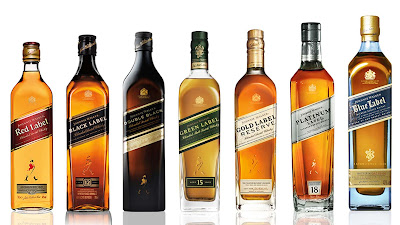 Some 95% of spirit produced at the distillery goes into Diageo’s Johnny Walker Blended Whisky brand including the Red and Black Label. More Caol Ila goes into their premium Double Black. The Caol Ila malt is blended with grain spirit made at one of Diageo’s Spirit Grain Column still distilleries to produce the most widely distributed blended Scotch, sold in almost every country around the world.The other 5% is bottled as single malt. This is distributed and sold with that classic Diageo multinational marketing dominant approach. All expressions have been chill-filtered removing much of the natural oil and the whisky has been coloured with E150a caramel colouring to give a brand colour consistency between bottlings.Unlike other Islay whiskies which are matured on the island, almost all Caol Ila distilled spirit is ferried off in tankers to the mainland where they end up in colossal Diageo maturation warehouse “cities” and then bottled in a central bottling plant.

Its only claim to fame is that the distillery is the largest on the island but with the smallest distillery shop on Islay. It offers the worst distillery tours on the island as well, where photography is forbidden during the tour.
Packaging and artwork is bland and totally uninspiring.

Having said this, if we were playing a game of “what if…” - “Stranded on a Desert Island” and I had to choose only one whisky to take with me to the desert island where I would have unlimited supply, then my choice would be a Caol Ila!

As we are going to compare three Caol Ilas, I thought it important to describe what they all have in common.
Salty Sea breeze and seawater spray. Smoky bonfire cooking on the beach with sea salt impregnated twigs. In the pan simmering away, is sweet seaweed cooked in Barley sugar, rice wine, butter, mackerel, Apple malt vinegar, freshly squeezed lemon juice, lemon salt, lemongrass, Wanton soup with pastry dumplings and Marmite twiglets. Salty pebbles on a beach, seashells, muddy seawater, stewed apple and custard to finish.
I am only going to talk about the standard peated Caol Ilas. Despite the many enthusiastic reviews by various bloggers and reviewers, my advice is to avoid the “Limited Edition” Unpeated versions! It’s like going to a famous Chinese restaurant for dinner, expecting a full Eastern culinary experience and instead being served English tea with milk and plain digestive biscuits with some vodka shots on the side! I’m not joking. It’s really like that!
Despite the blanket curse of Diageo production of chill-filtering, E150a colouring, low bottling alcohol abv and mainland maturation, what comes through, NO! what screams out through the whisky, is the exceptionally skilful distillation process employed, the insistence of only the highest quality malted barley and expertly chosen casks used.
American Oak Ex-Bourbon casks and hogsheads.

Diageo owns the largest inventory in Scotland (by far), of Ex-Bourbon American White Oak from North America which amounts to some 9 million casks.  They also produce thousands of 250 Litre hogsheads in their own cooperages, made up from the wood taken from three to five old 180 Litre standard American casks. The wood is refurbished and given a medium char after reassembling.
The Peated Barley 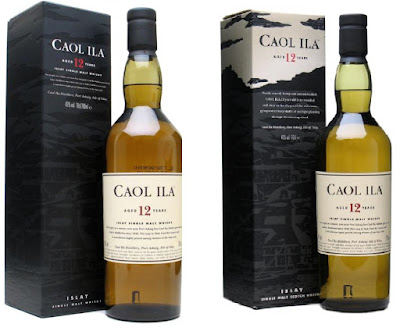 Some online reviewers complain that the 12 Year-Old is not as good as it was say 10 years ago. Obviously, with different casks and combinations of casks, seasons and peat quality, the whisky must change slightly. It is disingenuous for a reviewer to complain about the use of E150a colouring for consistency and then go on to moan about how it doesn’t taste exactly the same as it did the last bottling! I don’t hear wine lovers complaining that their favourite Pinot Noir vintages 2009 doesn’t taste the same as the 2013! On the contrary, they celebrate the different vintages. What would be a legitimate complaint is, if the overall quality has gone down. Some would say that this is the inevitable consequence of its increasing popularity. As the saying goes, they are a victim of their own success.
It is all too apparent that many Diageo distilleries are struggling to meet demand and can no longer maintain, let alone increase production of their traditional age statement expressions which is why we are seeing the disappearance of the Talisker 10 and the appearance of the Non-Age-Statement expressions (NAS) Talisker “Skye”, “Storm” and “Dark Storm” and the disappearance of the Oban 14 and the appearance of the NAS Oban “Little Bay”. 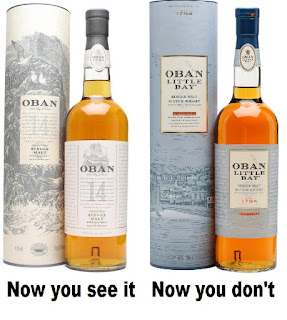 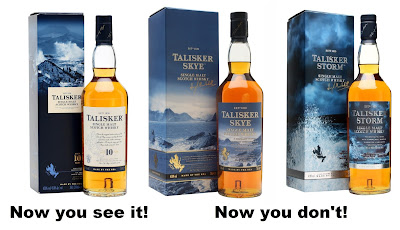 We should be thankful that as yet, there are still plenty of Caol Ila 12 Year Olds on the shelves and we have not as yet seen the likes of Caol Ila “Port Askaig” or “Paps of Jura” NAS.
About a year ago I did indeed compare the old Caol Ila 12 with the all over black box (circa 2006-2011) with the new packaging black and beige stripe box version.
Comparing side by side, my own opinion is that they are noticeably different but I’m not sure there is any loss of quality. The old bottling is slightly more briny, marmitey smoky meaty and sweet lemon. The newer bottling is more like butter and smoky mackerel, fresh lemon zesty, rice wine and apple malt vinegar. The newer bottling has a slightly more of an oily mouth fill perhaps? Different they are but which one is better? Difficult to decide. I like them both.
The Big Caol Ila Comparison 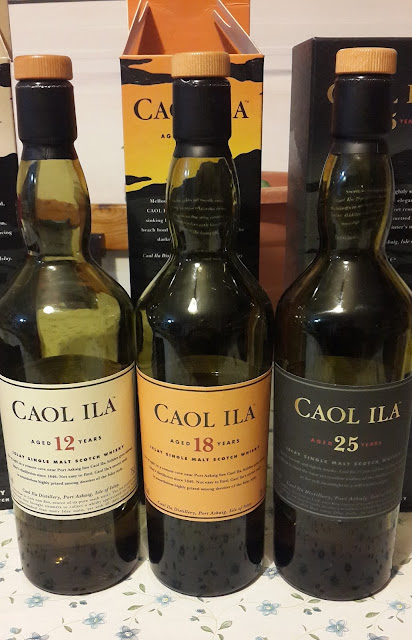 I have actually performed the Caol Ila Age game a few times with friends. I’ll no doubt keep doing it until the 25-YO finally runs out.
Three glasses laid out in a row. From right to left is poured a dram of 12 YO, 18 YO and 25 YO.
I have identified three flavour variables in this comparison.
1. Peat and seaweed influence.
2. Fruitiness.
3. Wood spice.
All three have these three flavour elements but in different amounts. 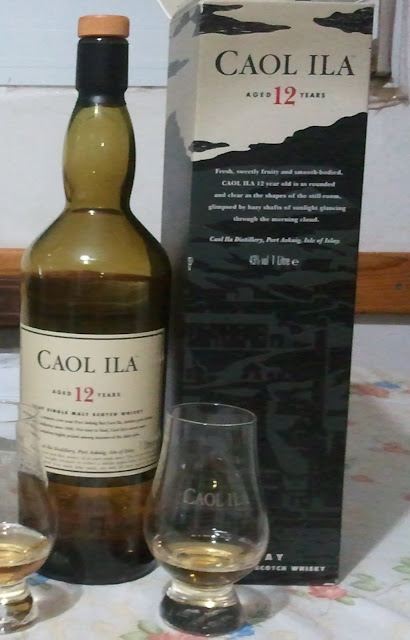 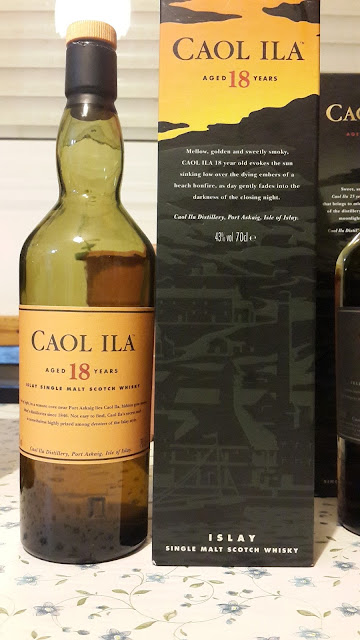 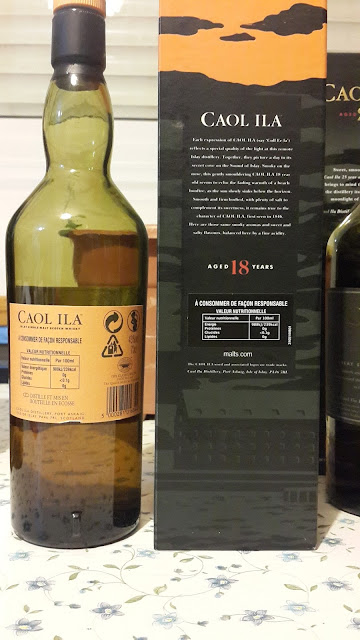 The 18 Year-Old is altogether calmer, sweeter affair. The seaweed peaty influence is still there but very much in the background. Up front are luscious yellow and green fruits. Ripe juicy pairs, Honeydew melon, ripe apricots, peaches and glazed oranges. Glazed Lemon rind; the lemon is there but it’s cooked lemon now like sucking the lemon slice that came from a glass of tea. There is hibiscus and sweet pulpy yellow apple cider. The cardamom and other dry woody spices are much more evident as is the heather honey finish. 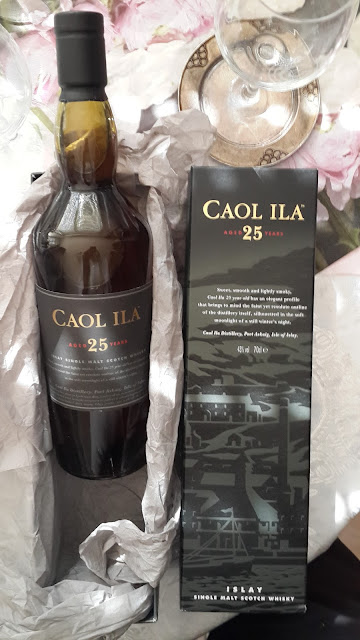 The 25 Year-Old has almost no peat influence whatsoever.  It has all the yellow and green fruits of the 18 YO but they are less fresh, even over ripe and slightly stale. The 18 YO has more fresh wood spice. The 25 YO has wood spice in abundance but its ever so slightly musky like sniffing the back of an old wooden cupboard. 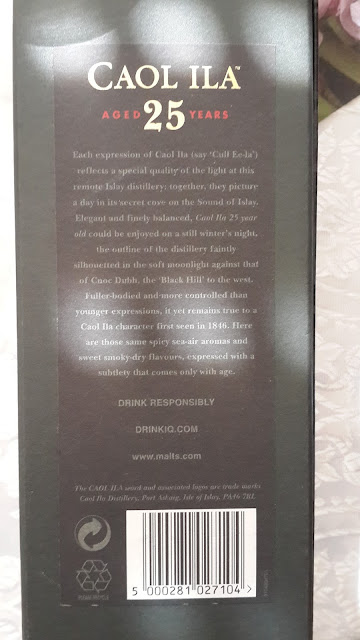 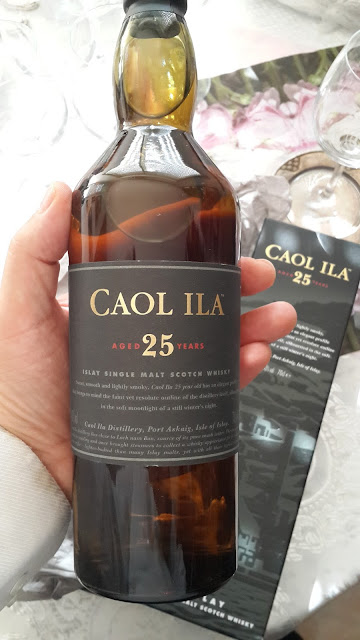 Don’t get me wrong. The 25 is a very pleasant whisky to sip but for me, a bit of a disappointment considering it costs twice as much as the 18 YO! It has lost the peaty vitality of the 12 YO on one hand and the lusciousness of the fruity 18 YO on the other. 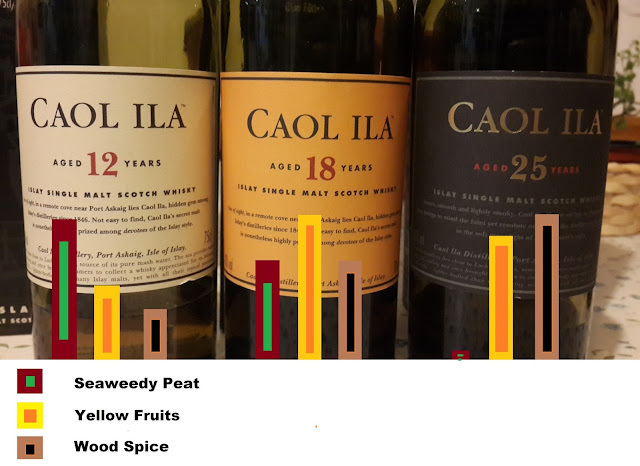 For me, the 18 YO hits the sweet spot as far as flavour balance and mouth fill is concerned, although I love the peat punch of the 12 YO as well with all that burnt lemony seaweed. As delicious as the 18 YO is, I would miss the seaweed peat punch of the 12 YO if I could not drink it again.
So, my top Caol Ila from the standard bottling range, is the 18 YO with the 12 YO a close second and the 25 YO in last place.
FYI.  My favourite all time Caol Ila however remains the magnificent Cask Strength Edition but alas is becoming increasingly difficult to find and comes at a hefty price tag.
Whenever I have given this Caol Ila 12/18/25 comparison presentation it has been really fascinating watching the participant’s reactions and receiving their opinions as to which one they like best. The 12 YO is young and more peat dominate, the 18 YO is a delicate balance of fruity sweetness and mild peat and wood, and the 25 is all fruit and wood. Which one will you prefer?
Conclusion: The Perfect Shabbos Seuda (meal) Dram
The Caol Ila 12 is the perfect whisky Friday night between the Gefilte fish with Chrein and the Chicken soup (don’t forget to eat some challa before the whisky just to clean out the palate, not only between the fish and the chicken but also between the fish and the Caol Ila. After the chicken and Coleslaw and Kishke, a glass of Caol Ila 18 to sip during the dark glazed orange chocolates and fresh fruit desert. Sip and hold in the hand whilst singing the last Zemirot before Shir HaMa’alot and the Benchin. A perfect end to the evening seuda.
Where you may ask is the 25-Year-Old during this seuda? The bottle, in my opinion should remain on the shelf, sealed and wrapped in Clingfilm (plastic wrap) to keep the box in pristine condition. Be’ezrat Hashem, it should make for a good investment in years to come…