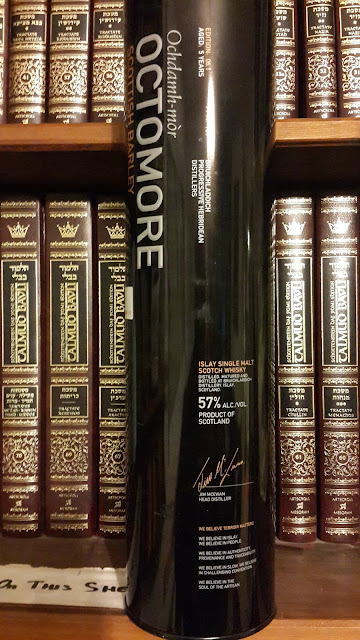 The Octomore series is the most heavily peated single malt whisky ever produced, by far. As the name would suggest, this is the 6th Edition, (we are up to the 7th now), bottled in 2013.
I’m sure most of you are familiar with so called “Heavy Peat Monsters” such as Benromach Peat Smoke at 67 PPM, Tomintoul’s “Old Ballantruan” at 50 PPM or Ardbeg 10 at around 55 PPM. Well these simply pale into comparison (at least on paper), compared to the Octomore 6.1 which boasts on the side of the black can an unbelievable 167 PPM! 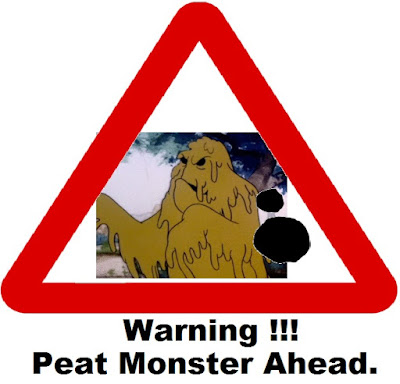 At this point I really would advise that anyone who has never experienced heavily peated Islay coastal style single malts such as Laphroaig, Lagavulin and Ardbeg or has and concluded that it's not to their taste, well then please give this a miss. It’s not for you.
If someone would say to you, think of what an Islay whisky would taste like three times the peat level of Ardbeg 10 and half its age (which would only multiply the peat influence), your mind would perhaps conger up a taste and smell “image” of industrial alcohol mixed with the remains of a fire made of scorched muddy seaweed and burnt hospital bandages. In short, undrinkable. In reality however, the Octomore is nothing like this and is actually a very enjoyable experience.

Octomore is named after the farm which overlooks Port Charlotte and Bruichladdich distillery. There you will find the ancient spring whose water is used to make Bruichladdich whisky. If that connection wasn’t enough, they went further than this on the tour and spun us a yarn that some 200 years ago there was a distillery at Octomore Farm which used to produce the most heavily peated whisky in the world. Hence the name.
The tour guide at Bruichladdich explained that the local Octomore farm barley used for Octomore 6.1 begins its germination process on the malting floor and then is brought to the Peat kiln floor and left there for a whole week, at which point it has been deeply impregnated with thick peat smoke wafting up from the kiln below, kept at a low temperature so as not to dry the barley out too quickly.
The actual PPM (Parts Per Million) phenol value is measured at the Mash Tun "porridge" stage before they add yeast in the washbacks and before distillation. You might think that at 167 PPM, the peat will destroy all other flavour influences. 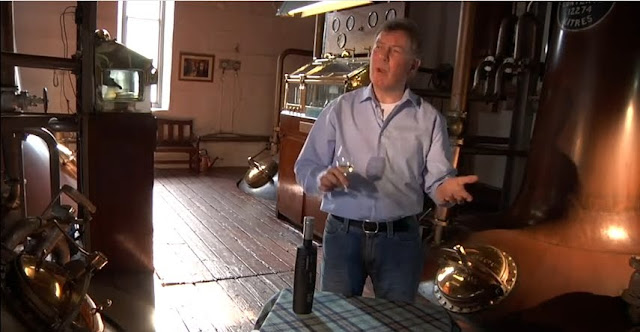 However, according to Jim McEwan, former Master Distiller and creator of Octomore, it is the height of the stills and length of distillation which will determine how much of that peat influence is translated into the spirit. Jim explains that quality barley, tall stills and long distillation process means that the peat will fully integrate into the more dominant fruity flavours of the esters despite the high PPM. 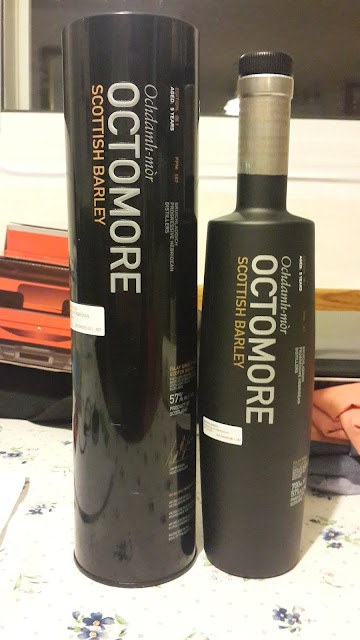 The guys at Bruichladdich intentionally chose a very unique bottle design in order to separate this very unique product from all other single malt whiskies. With that goal in mind they have very much succeeded. 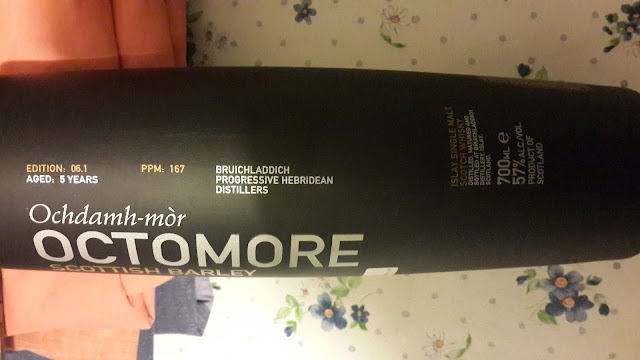 The package certainly stands out with the bottle resembling some kind of magnified expensive perfume bottle with the same matt rough glass feel as one. It is also much taller than any other whisky canister I know, being the only whisky canister able to accommodate my new extra long Megiilas Esther scroll which I will be’ezrat Hashem be using for the first time this Purim. 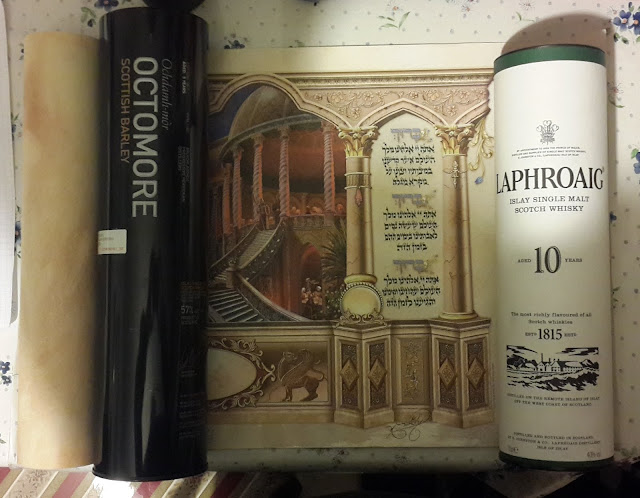 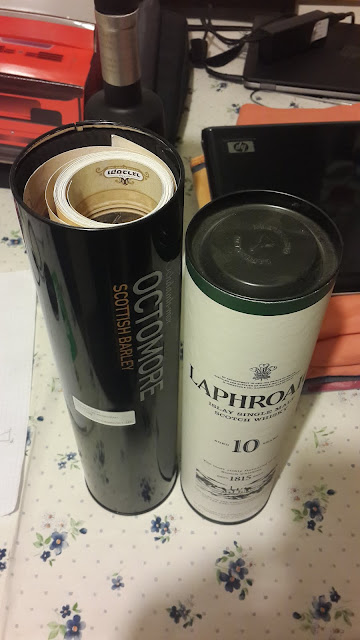 Although appreciating its uniqueness and aura of quality I am irritated by the fact that the bottle is totally matt black, so much so that I cannot see the level of whisky left in the bottle. 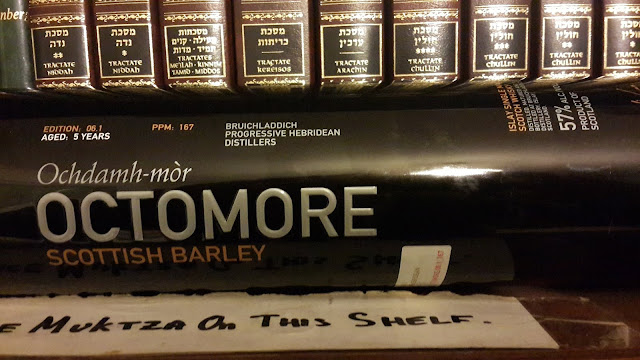 So, according to the canister and bottle, the whisky has a phenal rating of 167 PPM and bottled at Cask strength 57% Alc/Vol for Five years. The website states that all Bruichladdich whiskies including Octomores are Non-Chilled Filtered and natural colour although this really ought to be stated on the label.
What I do find very strange is that Bruichladdich, whilst revealing barley type, age statement and even PPM value, does not state, either on the bottle or on their website, which cask types were used for their Octomore 6.1 (although they do say for the 6.2, 6.3 and every version increment thereafter). Doing a Google search though, almost every review states that the 6.1 was matured in American Oak, 100% Ex-Bourbon casks. Indeed, when I visited the distillery back in October 2015, they confirmed this. All X.1s are matured in exclusively in American Oak, sometimes virgin and sometimes Ex-Bourbon. 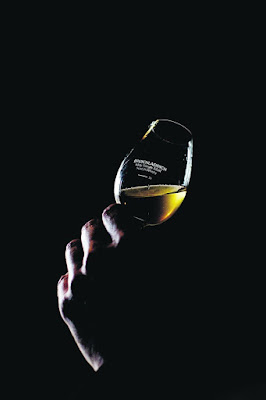 
Swirling in the glass, this is a thick rich yellow oily whisky.

My initial reaction was shock and surprise because you would obviously expect this to be the peat bomb of peat bombs which explodes in your nasal cavities -  but it really doesn’t. 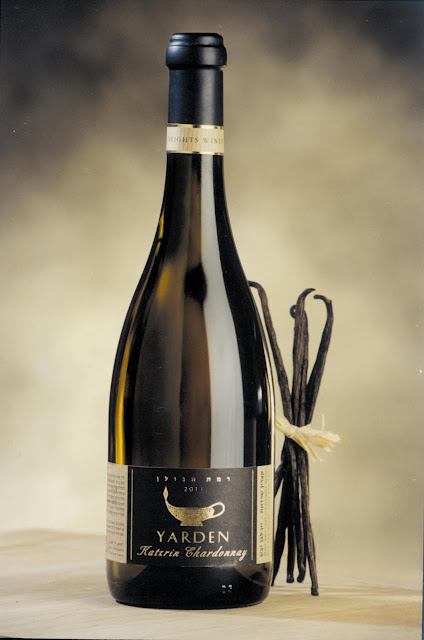 Instead what you get is a really smoky vanilla and Chardonnay fruity sweetness. 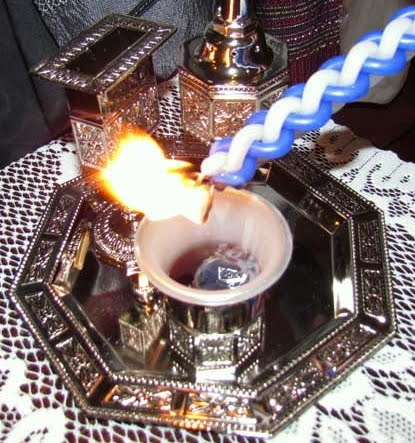 Have you ever just finished saying Havdallah and just immersed the candle into the spilt white wine on the Havdallah plate, only to have one of your kids come in late and say “have you said Havdallah yet?”. What do you do? You have to light the wet wine soaked, burnt multi wicked candle again. 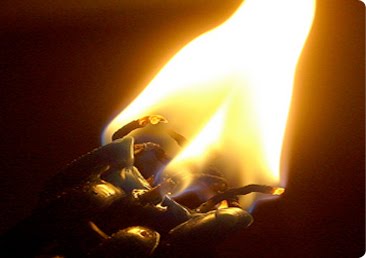 Those who recognise this scenario will know that the wick will sizzle loudly and let out a wonderful blue colour and sweet, smoky fruit smell.
The Train at Southend-On-Sea 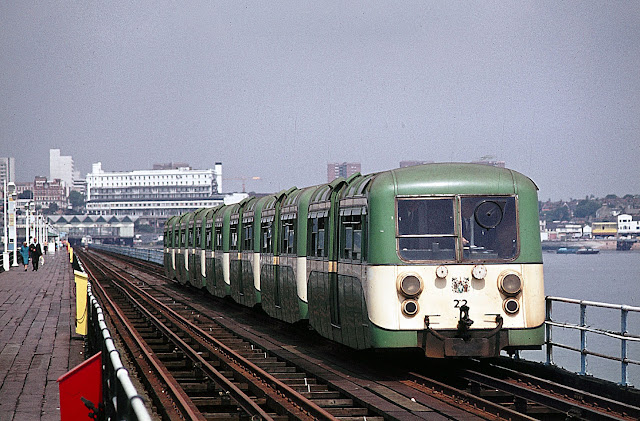 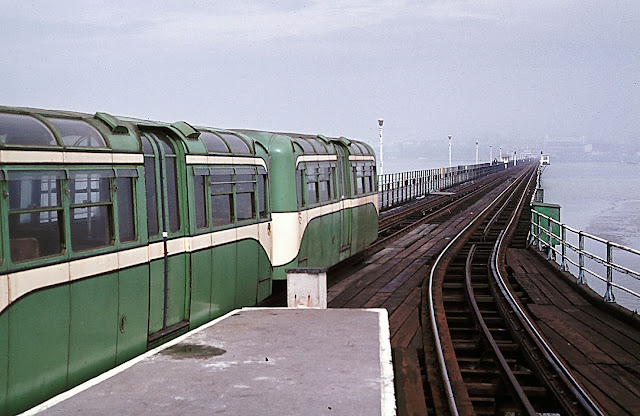 After the smoky Chardonnay comes something else entirely. It took me a while but I finally, (thanks in part to Ralfy.com's review of the Octomore 5.1) I nailed it!

It brought me back to my childhood in the 1970s and happy memories of the old (circa 1940s train stock) service that ran the length of the pier at Southend-On-Sea. Upon entering the green and cream coloured wooden metal carriage your nose encountered the smell of fresh paint, metallic train grease, and burnt electric cables. 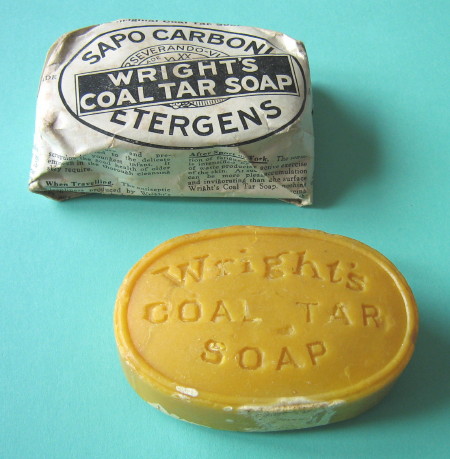 Now add the distinct sweet smell of Coal Tar cream soap disinfectant and salty sea spray soaked into the wooden panels and floor. You sit down and the aroma of sea-salt and loose leaf tobacco smoke ingrained in the seat wafts up to your nose. (By the way, those old carriages have long since been replaced by modern ones smelling of hospital disinfectant and public lavatories).
I apologise now to those who have never smelled wet Havdallah candle or Victorian Coal Tar cream soap. That’s however how I would best describe the smells of Octomore 6.1, straight from the bottle, without added water. A not unpleasant aroma but one which perhaps you would not desire in your whisky?


Next, I added a few drops of water and waited for a few minutes. Upon bringing the glass back to my nose I experienced a complete transformation. All the harsh metallic notes had disappeared leaving a very clean and much more balanced concoction of new spirit intense fruitiness, creamy sweet roasted sugar puffs soaked in vanilla milk, a touch of Chardonnay with lots of sweet tar smoke. 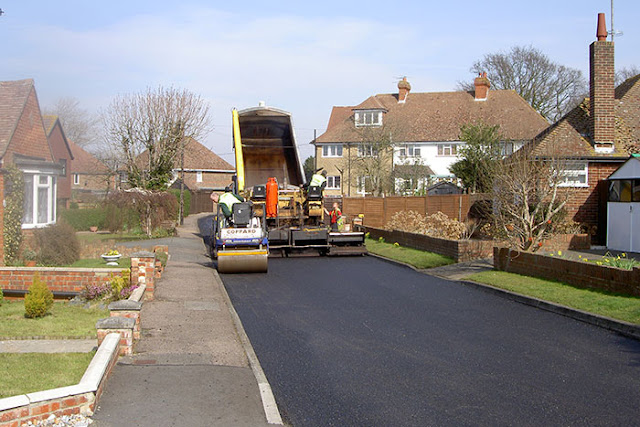 This brought another childhood memory back to me. I was walking home from school one day and the council workers were busy re-tarring all the roads. 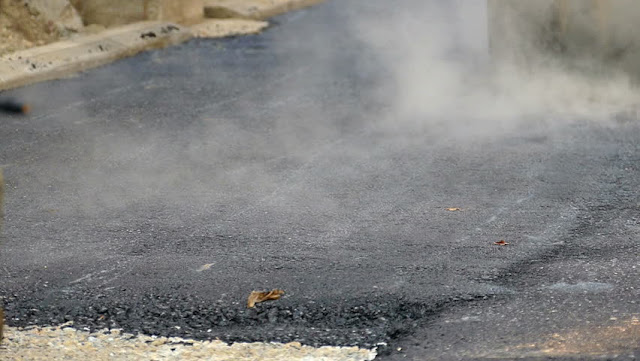 By the time I got home my head was spinning from that thick gooey sweet black smoky aroma. Was this the reason they chose a Tar Black bottle and canister for the Octomore?
Tasting
This is a whisky that demands a lot of patience and deserves an extended period of smelling to fully appreciate the experience. However, eventually the time for tasting must come. Even with water added, this is a very oily whisky and it is worth slowly swirling this around in your mouth to let every type of taste bud sample the Octomore. Far from being a “punch in the face” heavy Peat Monster, this is quite a graceful single malt. Yes, the peat reek is there but rapped in a flaky wafer made of oil, smoky Chardonnay, honey, freshly crushed vanilla pods and sea salt spray.
For me though, the finish was a touch disappointing. I was left with a slightly oily sweet, slightly burnt taste which lacked the fruity and barley cream subtleties which were present in the smell and initial taste. I am not sure but based on my experience with the Laphroaig 10 to Laphroaig 18 and the Caol Ila Cask Strength to the Caol Ila 18, I would make an educated guess that this whisky could benefit tremendously from a few more years of maturation in its Ex-Bourbon cask. I would love to taste this at 10 Years old instead of five and then at 12 Years perhaps? Anymore would I feel diminish the peat influence too much which is after all, the main event with the Octomore.
I bought this bottle back in October 2015 in London for £100 and I know that it is selling for much more now. The Octomore 7 is now on the market as stocks of the 6.1 run dry. Would I be tempted to buy it again? No, I don’t think so. I don’t regret buying it and really enjoyed presenting it as the centrepiece of a talk on peated whiskies I gave some months ago. Besides, where would I have put my Meggilas Esther?
Comparing it to other heavily peated whiskies, the Ardbeg 10 has a far more enjoyable rounded finish, the Benromach Peat Smoke is more refined and complex at 9 years old. For me however, I can’t help but compare it to the Kilchoman 100% Islay. Both were distilled only a few miles apart using very similar peat (all be it at very different PPM levels) and both around five years old and sharing that oily creamy barley mouth feel, yet if I were to present these two in a talk, despite giving each equal time, it is the Kilchoman bottle I would reach for after everyone had gone home.