A one day tour of Islay's distilleries. Part 2

We arrived at Port Ellen and I had the keys in my hand for our rental car within ten minutes. This was just as well as our first distillery tour was about to begin in a few minutes. Our first stop off point was at Laphroaig distillery. From Port Ellen, you drive down the village street, the shops and houses on your left, the open sea on your right, and make the first left. Within three minutes you reach the turning for Laphroaig, just in time for our tour.

The shop at Laphroaig was very impressive with their entire range of whiskies plus various distillery related gifts and clothes. 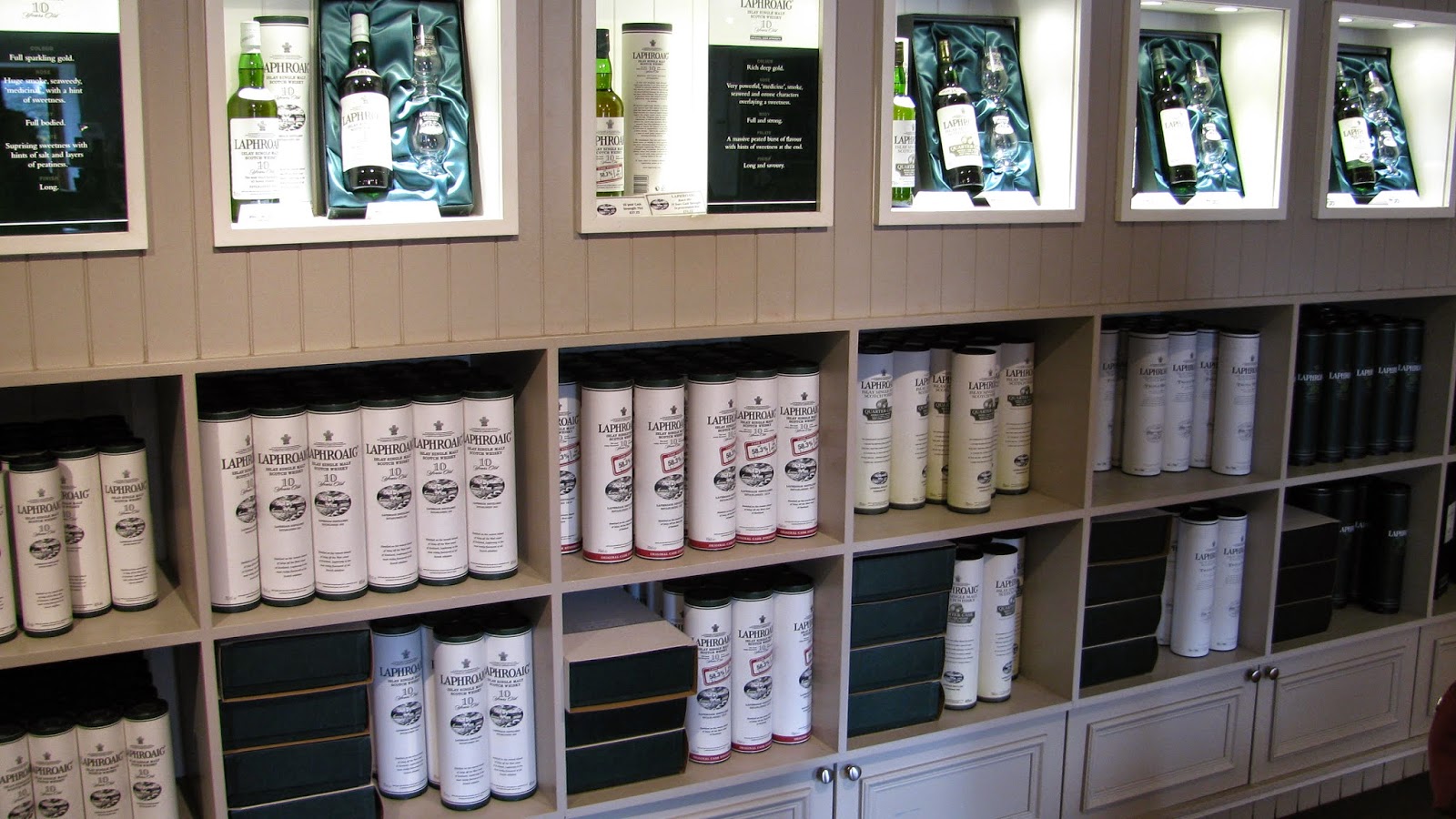 We stopped for a quick lunch in the gardens and harbour inside Lagavulin distillery and after that had a very interesting conversation with one of the managers there regarding their use of sherry and bourbon cask. It seems that their 16 Year Old makes heavy use of sherry casks whilst their 12 Year Old uses almost exclusively ex-bourbon. This is also substantiated by the colour, the 12 Year Old being substantially lighter than the very dark 16 Year Old.

The plan was to visit Caol Ila distillery and if there was time, Ardbeg, only a few short minutes from Port Ellen to catch the ferry back to the main land. We would have loved to have visited Bruichladdich on the West coast as well but there is a limit to what you can do in half a day. Maybe next time Be'ezrat Hashem.

Being short of time, we decided to travel up to the north of the island via the beautifully scenic but very narrow B8016 which we thought would be quicker as it bypasses Bowmore. We swung a right and changed onto the A846 straight to Port Askaig. As we were passing right by it, we decided to stop off at the famous tourist spot of Finlaggen just to look around, then back in the car and a short drive further north to the Caol Ila distillery. 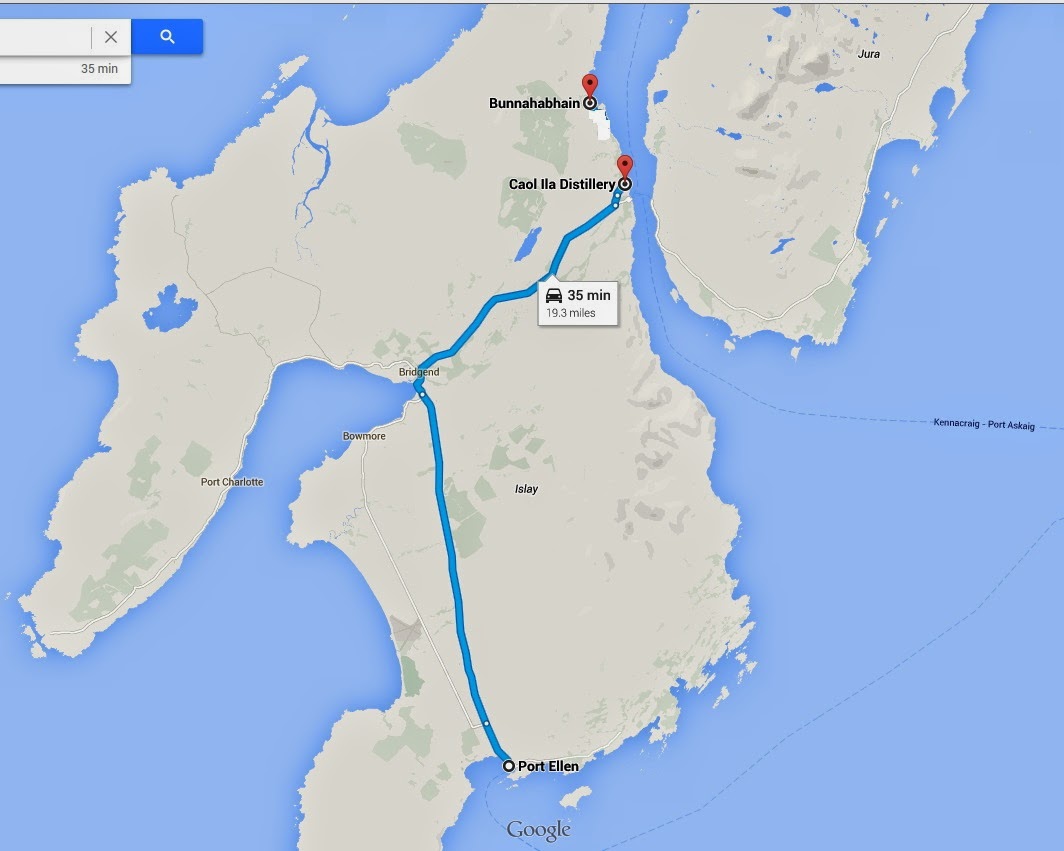 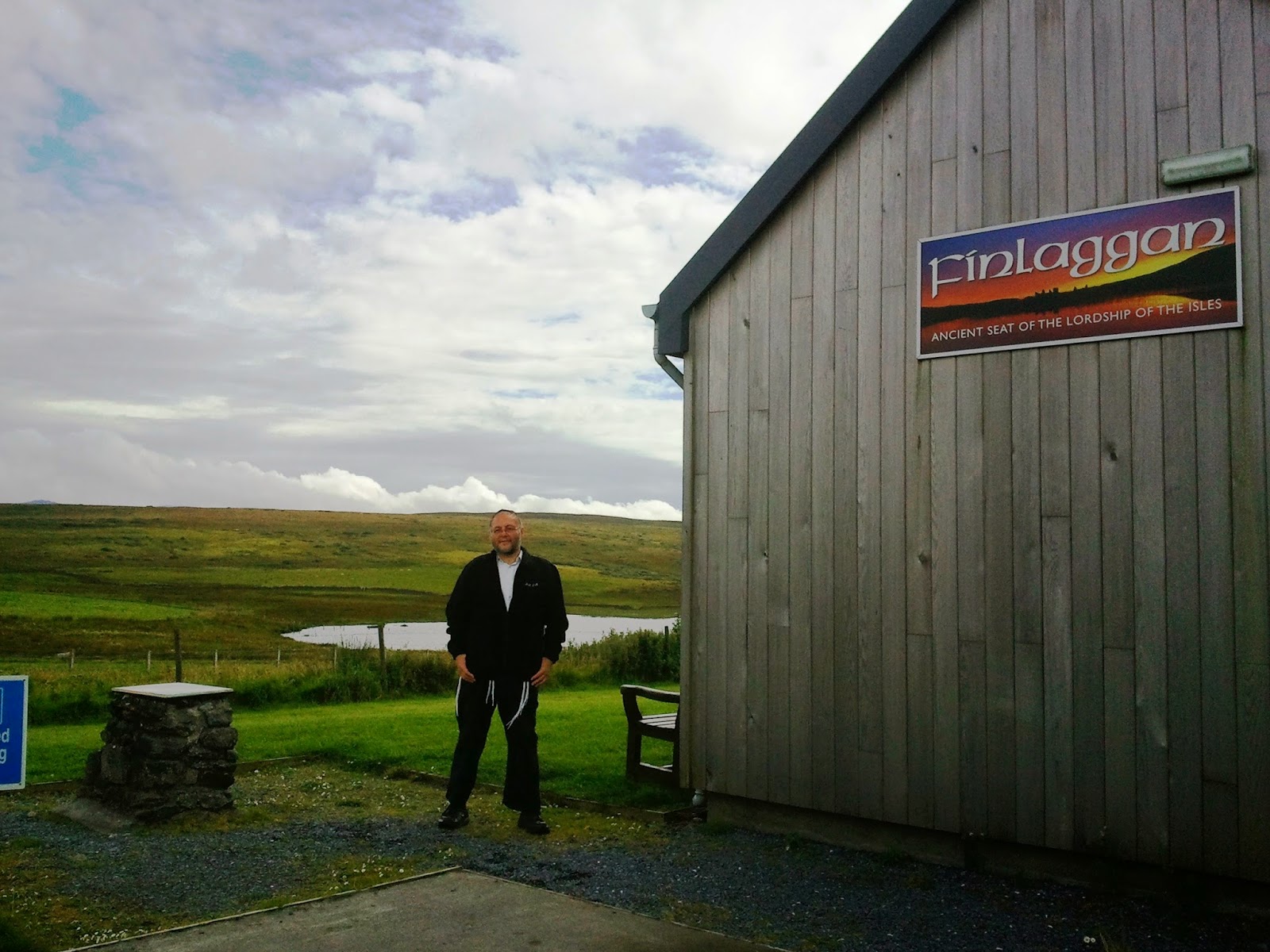 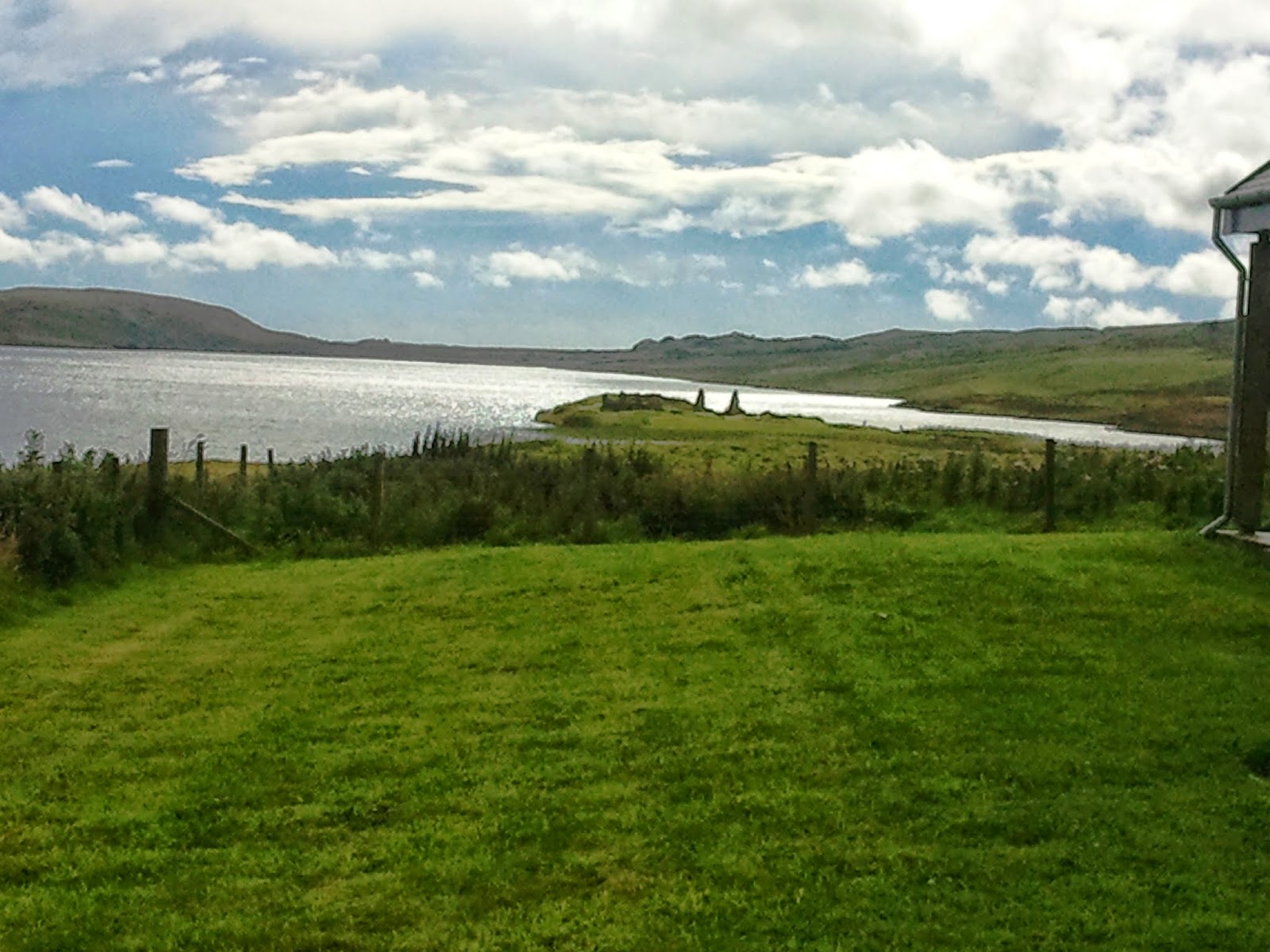 Being such a fan of Caol Ila, I have to admit that I was a bit disappointed with the distillery tour experience. I found the tour guide rather dry and unfriendly and a bit cagey when it came to answering my questions. The guide used the same excuse a number of times that it was Diageo’s policy not to divulge a lot of information and not to allow the tour a closer look at the machinery. This was in complete contrast to their sister distillery, Lagavulin, also owned by Diageo. 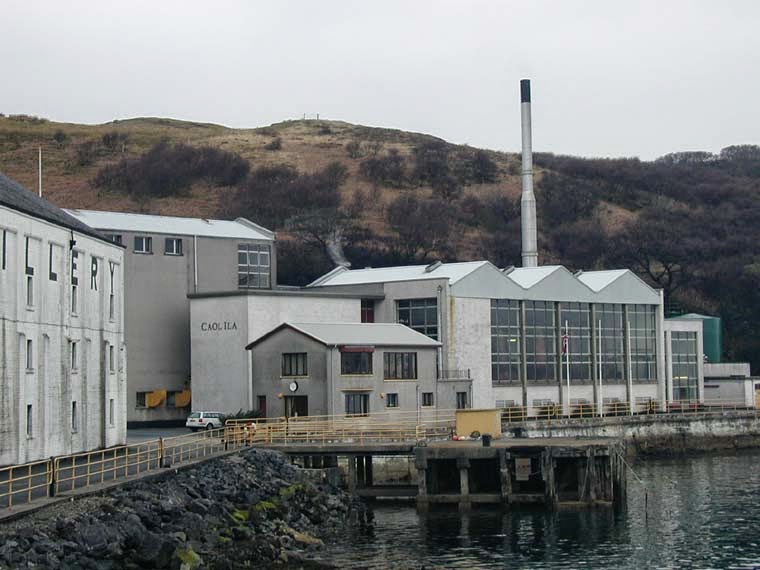 I was also a bit disappointed with the shop. It was small with very little merchandise at all. On my number one purchase wish list was a Caol Ila 12 Year Old Cask Strength or failing this, an 18 year old Cask strength but neither of them were in stock. The only bottles they had available were the standard 12 Year Old, the no age statement “Moch” and a very expensive limited edition 12 Year Old Unpeated Cask Strength at an incredible 64% abv. I was intrigued to know what a Caol Ila would taste like without the peat influence and seeing as it was cask strength and would need a lot of added water when drinking, despite it being only 70cl, it should hopefully mean that the bottle would last at least as long as a 1 Litre Duty Free size if not longer. 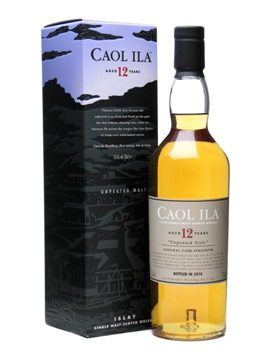 Initial nosing brought  massive punch of alcohol heat which would have surely burnt the inside of my nose had I not taken a cautionary light sniff, knowing that this was after all 64% abv.  I then proceeded to carefully dilute the Caol Ila, drop by drop until most of the alcohol heat on the nose had dissipated and then left the glass for a few minutes to settle down.

Once most of the alcohol heat had been reduced somewhat, there was not actually much aroma left at all except of mild dry roasted grain reminiscent of an old farm grain barn. It reminded me very much of Tormore, a Speyside whisky, known for its understated, mild and elusive character and taste. The taste of this unpeated Caol Ila was that of a freshly baked digestive biscuit. There was slight vanilla sweetness, biscuity baked barley and Scottish oak cakes(?) and perhaps a hint of a milky chocolate in the background. If I really wanted to be kind then I'd say that it reminded me of Chocolate Digestives. 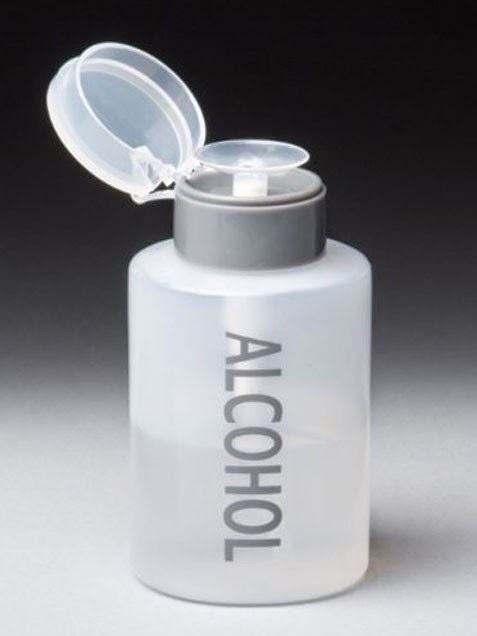 This was all subdued however by a sharp nip of flavourless pure alcohol on the finish. Experimenting with different amounts of water eventually reduced the whisky down so that it extinguished the alcohol nip but also any remnant of flavour along with it. Like Tormore, An Cnoc or Glencadam, very often that alcohol nip dissipates once the bottle has been opened and left for a week or two. Not so with the Caol Ila 12 Year Unpeated.

However, most striking of all was not that there was no peaty smoke but to my shock and not a little dissatisfaction, there was not a hint of briny sea air and sweet and sour lemony seaweed so associated and characteristic of the whole Caol Ila range. In fact, this whisky had absolutely no connection to the aroma and taste that one usually associates with any Islay whisky.

I had made an amazing discovery. It was clear that as a result of removing the peat influence from this Caol Ila, they had also removed all trace of that romantic Islay sea air personality. The peat used to heat the oven which dries the barley that goes into regular Caol Ila is dug up locally. In fact we saw whole trenches of peat bricks on the side of the road as we were driving up Islay. This peat is rich in seaweed, seashells and many other marine influences. Not only does this peat impart an earthy  smoke flavour to the finished whisky, it also is responsible for giving it that seaweed briny character.


Despite the Caol Ila Unpeated getting some rave reviews, you can probably tell that I was less than impressed. What is the point of a Caol Ila that tastes nothing like Caol Ila? I’ll tell you. So that you can have the wonderful and immensely enjoyable opportunity to present “The Coal Ila Brine Mystery” to your friends.

Present them with three glasses. One contains Caol Ila 12 Year Old unpeated, one contains the regular 12 Year Old Peated and the middle one, a blend of the two. Next, you ask them where they think that briny sea air personality comes from. The water? The air?, the casks? You then invite them to partake of the whiskies and compare the unpeated and peated. Sit back and just watch the utter surprise on their faces when they realise where that sweet and sour briny taste is actually coming from. You can then ask them to taste the middle glass and they will then be under no doubt what is going on.

From Caol Ila distillery, we drove back down the same way we came and made a mad dash for Ardbeg distillery. We only had about 40 minutes before we needed to be back in Port Ellen.

We did not have time for a tour but we did spend some time in their very impressive shop which was packed with all sorts of goodies. So ended our one day tour of Islay. We parked the car outside the ticket office and handed the keys into the ticket collector before boarding the ferry back to the main land. We left with a feeling that despite packing so much into a single day, there was so much more to see which deserves a second visit. We were already planning our agenda - A stroll round the capital, Bowmore, a tour of the west side of the island and a visit to Bruichladdich and Kilchoman distilleries. Maybe next year...