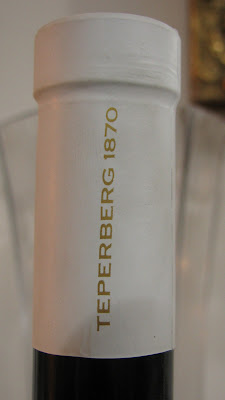 This wine has been popping up all over the place recently. I saw it in all the wine shops in Machane Yehuda this week for around NIS 60*.  Browsing the shelves of my local supermarket, I saw this Teperberg on sale for NIS 31. I wouldn’t usually have even considered buying an Emerald Riesling but as this was Teperberg and on sale for half price, I reconsidered.

Emerald Riesling (pronounced “Reezling”) is a Californian hybrid invention whose parents are the Riesling and Muscadelle grapes.
The Riesling, also known as "German Riesling" comes from the area of Germany and Austria. It is a dry grape that has traditionally needed some sweetener to make it palatable. This was either by blending it with a sweet grape or, for the cheaper wines, adding sugar.
The Muscadelle grape comes from the French region of Bordeaux. It is a sweet light grape.
At least on paper, it does make sense making a hybrid of these two contrasting grapes. In practice though, the product can suffer from a lack of body and taste and has a reputation for being a cheap wine, not to be taken that seriously. However, for some reason, this grape has met with quite a bit of success here in Israel over the years. Many Israelis it seems, have a sweet tooth when it comes to their wines.
So, despite knowing its reputation, not being a snob and having recently reviewed other Teperberg wines (as well as the incentive of the sale price) , I decided that we would give it a try for Shabbos morning Kiddush. 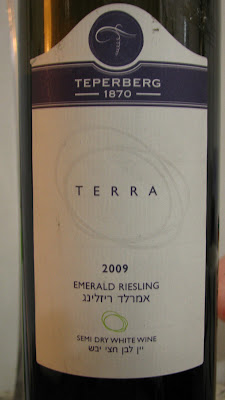 The first thing I noticed from the label is that this wine is from Teperberg’s cheaper range called “Terra” This is what the Teperberg Internet site has to say about it:
“The Emerald Riesling wine is conceived from white grapes, a creation of the University of California’s Dr. Harold Olmo, who cross-bred Riesling with Muscadelle grape varieties. The Muscadelle-Riesling cross yields a grape variety which is rich in acidity and aromas yet delicate in taste. Consequently, the Emerald Riesling is vastly used as a blended wine component although many wineries worldwide use these grapes to produce a superb semi-dry white wine that holds its own. Contrary to the rest of the world, the Emerald Riesling is an extremely popular grape variety in Israel and many long for its sweet, lush taste throughout the country. “
We opened the bottle. The initial aroma was one of sweet white Kiddush ("Mascati" style) grape juice and syrupy sultanas. Pouring the wine out into our Kiddush glasses, we observed a pleasant light yellow colour quite similar to a Chardonnay. Isn't an Emerald Riesling supposed to be greenish is colour? Never mind.
Let me say up front that I do not care for sweet wines and was slightly worried that this would be too sugary for me. Indeed, as I have already described,  the aroma certainly gave an indication that this would be sherry like syupy sweet but I noticed that the label states that the wine is only 75 calories/100ml which seemed to indicate that it was not that bad. A sweet wine would be 90 calories plus! 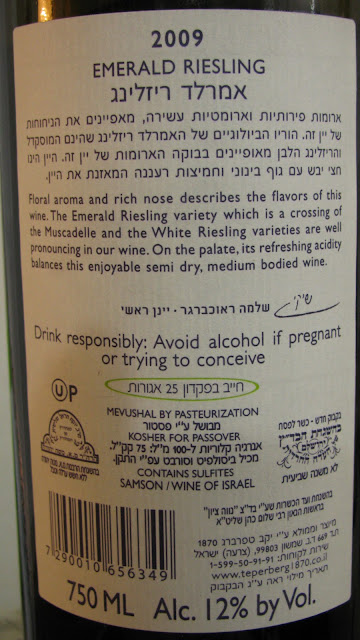 Drinking the wine brought varied opinions from my family. My wife liked the sweetness but said that it was too heavy for her taste. My kids really enjoyed it though. They described it as “fun to taste”. As for me, well, it was too sweet for my palette. However, I could see what my kids liked about it. It has a medium body with an initially delicate sweetness that turns into a slightly dryer aftertaste. This left you with the impression that it wasn’t as sweet as you at first thought.
Conclusions:
A pleasant enough wine with no nasty surprises, but without sufficient character to be taken seriously. This is only my opinion though. My kids said that they really enjoyed it and would like to drink it again. So, if you do enjoy a good semi-sweet wine, this is not a bad example of one.
Recommended for those with a sweet tooth.

* Talking of Machane Yehuda. My son and I were looking at the whisky prices in the wine stores. They had a good selection of single malts there. However, by the look of all the dust on the cartons, no one is buying them and for good reason. The prices were simply outrageous! NIS 499 for a standard “The Glenlivet 12 year old”.

This whisky is around NIS 150 for a 1 litre bottle in the “Duty Free” and probably only slightly more expensive in the British supermarkets. How about a “The Glenlivet French Oak finish 15 year old” for NIS 899? 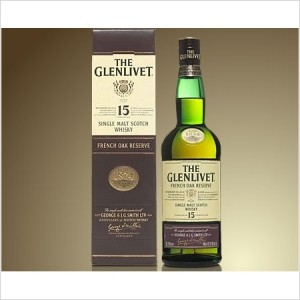 The “Duty Free” price is around NIS 200. Exactly how much TAX is on whisky in Israel? Googling this question did not return any definite results but it seems that there is around 200% import tax on a bottle of whisky. However, the tax on Vodka is a lot less! Now, why would that be? “Ya Ne Znayu. Da”!, as they say in Russian.