On Thursday I was in the mood to take some risks as far as my choice of wine was concerned for Shabbos.

On Thursday afternoon I was browsing the "Yesh" supermarket shelves in their wine section where I came across a special offer for Carmel Mizrachi's "Private Collection" Chardonnay, vintage 2009.

Carmel's "Private Collection" is supposed to be their basic quality range, a notch higher than their budget  (cheap and nasty) SelectD range of wines, I suppose equivalent to Golan Winery's Gamla range at least as far as prices are concerned. That is the NIS 60 to NIS 80 price range.

This Chardonnay was marked down from NIS 60 to NIS 32. Now the first thing to look for in a Chardonnay is that it has a golden yellow colour as opposed to say a Sauvignon Blank of Riesling which has a greenish colour. The colour looked promising and the price enticing so I decided to give it a try.

Later that evening when I went shopping with my dear wife, I again was browsing the shelves of our local supermarket where I came across a lone bottle of Golan winery Gamla Pinot Noir 2005 hiding at the back of the shelf. The bottle was covered in dust and the label looked slightly faded. To find a wine more than 4 years old in a regular supermarket is quite a rarity and as they were selling it for the price of their 2007/8 I was tempted to buy. I held off for a few minutes though, fearful of the thought that they may not have looked after it and the contents could very well be vinegar. My excitement of this rare find however was too much to resist so I bought it. Marked price was NIS 62. 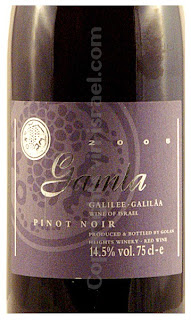 We got back from shul on the Friday night and I immediately went to open the Pinot Noir in order to let it breath between Shalom Aleichem, Aishes Chayil and the kid's brachos. I first of all used the Golan winery cork screw that we received as a present from our winery tour. This type of cork screw is called a "Waiter's corkscrew". The device opens the bottle by pulling the cork from one side only. 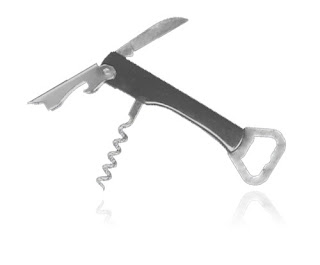 Upon lifting the leaver, to my dismay, the top of the cork crumbled away. Not a good sign! The cork was dry, due no doubt to years of storing the wine standing upright instead of on its side. I began to fear the worse.

In desperation, I grabbed a regular "Ballerina" style cork screw which opens the bottle by applying pressure on all sides, trying as best I could not to cork the bottle, (leaving bits of dried cork swimming in the wine). 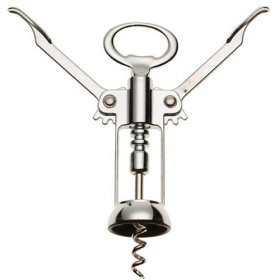 The cork came away smoothly this time. My optimism returned as examining the rest of the cork, I found it to still be in good condition.

After the brachos I poured out the Pinot Noir noting its earthy woody smell. Using my wife's glass (my one was filled to the top) I swirled it round a little noting the muddy dull black red colour, typical of a good Pinot Noir. I took a sniff in order to establish if I could say Kiddush over it. (Had it even smelt even slightly sour I would obviously have not used it). It smelt like grapes and berries lying in the field after a good rainfall. The mixture of wet fruit and soggy earth was very pleasant. It looked or rather I should say, smelt promising.

I said Kiddush very slowly with a mixture of anticipation and trepidation. I knew that an enjoyable wine for Kiddush would be a great start to our Oneg Shabbos. On the other hand, the risk that one's first sip of Shabbos would be sour was almost too much to bare.

Kiddush completed, I drank the wine. Two swallows and then a third. My family looked expectantly for my reaction. I broke out into a broad grin. Distributing the wine as quickly as possible to give everybody else a chance to experience the wine, we all agreed that the risk had paid off. It was superb. It had a light to medium fresh earthy flavour that developed into a long lasting aftertaste of sweet soaked berries, oak and refreshing slightly muddy rain water. Truly delightful! What a find and what a price! I closed my eyes and let the wine sit in the mouth for a few seconds to really savour the depth and complexity of this trully elegant drink.

Shabbos morning we opened the Carmel Mizrachi Chardonnay 2009, straight from the fridge. The initial scent was not promising, smelling slightly acidic. However, swirling the glass around for few seconds brought out a more typical Chardonnay aroma of buttery fruit. I recited Kiddush and we drank the wine. The initial taste was good, showing that deep creamy fruity flavour. However, within a fraction of a second, my tongue was accosted by a very unpleasant fizziness that only amplified as the fruity taste dissipated in the mouth. Yuk!

Another disappointing Carmel Mizrachi and no wonder it was on half price. Someone messed up big time here. I know that this winery has recently won some international awards for its most exclusive ranges. That's all well and good but they really ought to take care that their basic quality range as sold in regular supermarkets is at least drinkable. (We threw the rest away as it wasn't even suitable for cooking with).