As it's Yom HaShoah today I thought it would be a good opportunity to talk about one of the best Holocaust films I have ever seen, suitable for all ages but especially good for children as it shows no explicit scenes of gore that would frighten children. Nevertheless, the film transmits an exceptionally powerful and haunting message that has certainly left an impression upon me, even after all these years.

The film stars Brett Marx as a Dutch teenager called David Goldberg who is obsessed with the American Wild West, and Rod Steiger who plays a German colonel named "Gluck".

Now bear in mind that this review is based on my memory from about 25 years ago so forgive me if I have some details wrong.

The Germans invade Holland. We first see David in his attic bedroom full of American Wild West film posters. He is wearing a cowboy hat and has toy cowboy guns in his hands, play shooting at an imaginary enemy. We here screams from down stairs and sounds of boots running up the stairs. David escapes through the window and runs over the Dutch rooftops. Eventually he escapes to the countryside and makes his way to a small village where he helps out in a local farm. The whole village knows that he is Jewish (I'm not sure how) and when the Germans come they insist that all Jews wear the Yellow star.

The mayor of the village calls David into his office and with trepidation and shame, asks David to wear this yellow star on his chest. David looks at the star and within his fantasy world, understands that the town has just made him sheriff! He walks out wearing the star with pride. The next stage is to find himself a sheriff's office and Jail and after that, to find himself a real outlaw to lock up! Obviously it will have to be the leader of the gang of outlaws in the town and that would be colonel Gluck, head of German forces in that area. 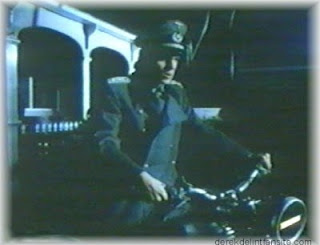 Through a daring and naïve plan, David succeeds in capturing the colonel and puts him in jail. So begins a series of conversations between a German officer and a Jewish boy. After the initial fruitless threats, Gluck soon realises that it will do no good as David is completely immersed within his fantasy world and believes that he really is the sheriff with a criminal in his jail. The conversations that entail on morality are surreal yet sobering for the officer who gradually comes to realise that he is in fact a murderer and a criminal. Who is really living a fantasy? 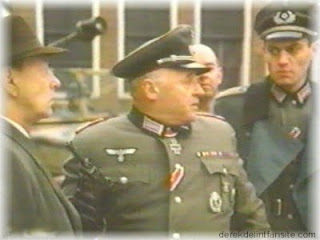 I won't spoil the film for anyone who might get to see it in the future but I will say that like all good cowboy films, it ends with a dramatic one on one gun fight.

The only review I found on the Internet was a New York Times article from 1982 where the reviewer completely slates it. Her major critizism revolves around the confusion as to whether the film is supposed to be a Holocaust drama, a comedy or a musical. I actually don't remember the songs in the film but I trust the reviewer when she says that there were.

Sadly the film is completely unavailable today on any format. Doing a search on Amazon or IMDB sites have no links to where one can purchase this film. I used to have a VHS copy of the film which I recorded in the mid 1980s when it was shown on British Television. (I cannot remember the channel). I donated the tape to the Jewish Video Library in Balfour House in London. I assume they still have it somewhere (?)